Alleged image of Motorola Moto G leaks out on Twitter

After appearing alongside the Moto X on Motorola’s website the other day, the yet to be announced Moto G showed up yet again. This time, an image of the smartphone, along with some alleged specs made the rounds on Twitter. 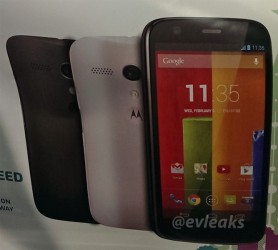 Alleged photo of the Moto G (click to enlarge)

Reportedly, the Moto G will feature a Qualcomm Snapdragon S4 Pro SoC with 1.5GHz quad-core CPU. The display is said to be a 4.7” 720p unit. An 8MP camera, 8 or 16GB of built-in memory, and an LG-made 1,950mAh battery complete the list of leaked specs.

The Moto G is said to start for free on contract when available.

I'm hating on bad journalism. This phone is nothing like moto x, not even close, this is not a matter of opinion, it's a matter of fact (look its specs). Stop calling it moto x's "little brother" and I'd stop raging out. It's just ano...