Amazon dethrones Apple as most valuable brand in the world

Amazon's brand is now valued at $315B, while Apple and Google are neck and neck at $309B. Microsoft sits firmly in fourth with an estimated brand worth of $251B. 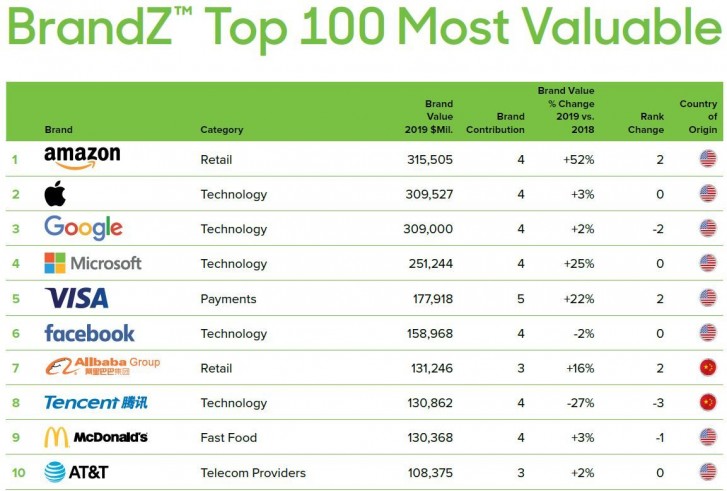 It's important that we differentiate between most valuable brand and largest company by market cap. Microsoft is currently the biggest company, in terms of its market cap, at around $1,016B, followed by Amazon's $916B, Apple's $751B and Google's Alphabet at $750B.

Back to the world's most valuable brands - 8 out of the 10 are American companies with Visa, Facebook, McDonalds and AT&T filling in the blanks. The other two are Chinese brands Alibaba Group and Tencent.

Out of all listed brands only Tencent and Facebook have seen a year-over-year decrease in brand value - -27% for the Chinese company and -2% for the social network giant.

Well tbf, they're the most valuable company in the world because plenty of people do see themselves getting something from it, they get cheaper products and efficient delivery for said products aswell other prime benefits if they go for that

Amazon not a tech company? Good one.

when i was a kid i wanted apple . now i feel that they don't have any ,edge in market .