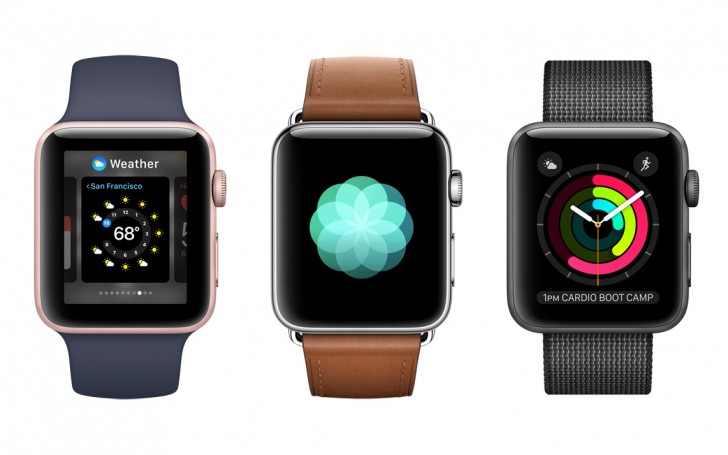 While the new Apple Watch Series 2 looks pretty much the same, it is now water-proof and can go up to 50 meters underwater. There is no time limit, Apple says it tested these Series 2 watches for weeks.

The speaker in the new Watch is the only place where air can get and it is now designed to automatically push the water out after a swim workout.

The Watch Series 2 comes with integrated GPS, so you can now leave your iPhone at home. It also upgrades on the CPU and GPU with the new Apple S2 SiP - the processor is now dual-core for up to 50% performance increase. The GPU in the Apple S2 also granted an up to 2x speed bump.

The new Watch Series 2 features two times brighter display that can reach 1000 nits - the brightest display Apple has ever shipped.

Apple Watch Series 2 will come in the regular 38 and 42mm editions available in aluminum and stainless steel. There is also a new Ceramic model in white paintjob, four times tougher than the steel one. It can use any of the available bands.

The Watch Series 2 runs on watchOS 3 and is capable of super accurately calculating swimming workouts and burnt calories.

Apple is also upgrading its original Watch - it's now called Apple Watch Series 1 with the same dual-core processor found in the new Apple S2 SiP. The price goes down to $269.

Finally, the new watchOS 3 will become available for the current generation Watches on September 13.

And here is the full pricing and availability:

Every customer who buys Apple Watch from Apple will be offered free Personal Setup, in-store or online, to help set up and personalize their new Apple Watch with calendars, notifications, apps and more.

Anyone who wants to learn more about Apple Watch or watchOS 3 can register for the free workshops offered at every Apple Store.

yeah i tried apple watch at store, i did not liked the design,so if the new watch has same design and battery as previous, what is there to like.

Now make it a phone and pair it to the bluetooth earpods. Job done.