Apple is expected to unveil the iPhone 11 lineup in September, but the Russian luxury company Caviar already went ahead and started offering customized versions of the new flagships. The new design, based on a prototype, includes actual meteorite pieces, real pieces of the Moon, a handful of precious stones and an actual moving tourbillon on the back.

The whole ensemble would cost the astounding $49,990 and only a single unit will be made.

If you don’t have that amount of spare cash lying around, you can always pre-order some of the cheaper variants, starting from just $4,400. The iPhone 11 Explorer, for example, has a carved stone and titanium back with a design, imitating a satellite.

In between sits the Soyuz option that is “a proud celebration of Russian and Soviet spacemen” and has a tiny Soyuz-MS-01 made from parts of the actual spaceship. 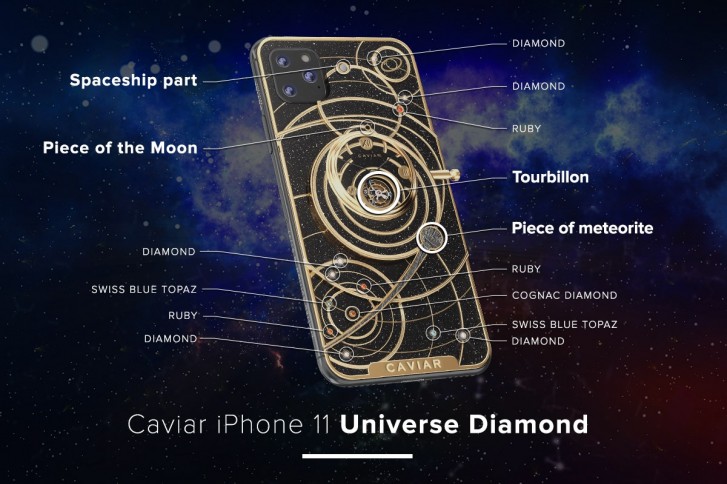 You’d think that a company selling a phone would give you specifications, but Caviar knows these things are not that important to people spending $50,000 on a phone. Plus, we are pretty sure it's got little clue about them beyond what we all know from leaks and rumors so far.

I bought one yesterday and now I feel broken.

This is such a beautiful design. I don't know why people are hating so much in the comment section. 50K might be a lot for you, but for some it's not a huge dent in the pockets. this brand is not for people with average income. so stop hating.

I will be the one to get this in my dreams. LOL