CR: Apple is still the top earner in the smartphone world

Even though 2019 is far from the most profitable year for smartphone manufacturers, Apple is still holding on to the majority of profits. According to the latest Counterpoint Research report, the Cupertino based tech giant is sitting at a massive 66% of the total industry profits despite only generating 32% of all smartphone revenues for Q3 period globally.

What stands out even more, is the fact that this is before the pivotal holiday period when Apple usually sees its highest sales figures. For reference, in Q4 2018 Apple’s profit share hovered in the 80% range and profits for Q4 2019 are expected to continue in the same vein. 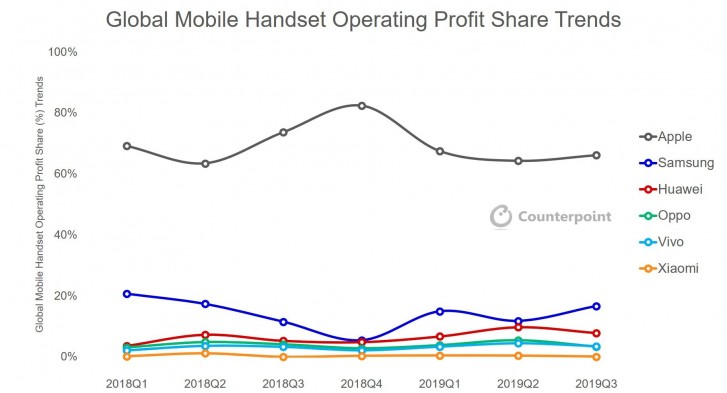 Looking through the rankings, Samsung is the second largest earner for the July - September period as it amassed 17% of the overall profits. This was fueled by the strong sales of the Galaxy A and Note10 series. The rest of the high earner pack includes Huawei, Oppo, Vivo and Xiaomi.

Counterpoint’s Karn Chauhan notes that Chinese brands are slowly managing to improve their profit margins however they are nowhere near the margins that Apple manages. On the other hand, 2020 is touted as the year of 5G commercialization and the Chinese players will all benefit from the push to 5G and will be able to increase their average asking prices.

Exactly. Reality. Hopefully you're with the program now

Yeah we are talking about reality. Not about your fantasy kingdom.

It doesn't matter how much they profit by selling overpriced devices! Please be thankful to US people.. Or Apple would be disappeared by long..