Using two SIM cards in one phone is increasingly becoming an option that people are willing to consider. Using both a personal and a business number with one single handset, saving some money by combining two different plans or network carriers, or using regularly local pre-paid cards on your business trips - all those are just example reasons why one should turn attention to a dual-SIM mobile. You no longer need to carry two mobiles on you at all times since manufacturers have been coming up with ingenious ways of dealing with the situation. The dual SIM holder was the forerunner, dual SIM adapters following shortly after. These were obviously not enough of a remedy, so dual SIM phones have recently started to appear on the market. Major mobile phones manufacturers seem disinterested, or try to avoid potential pressure from the telecoms. However, small-scale manufacturers have taken the plunge in search of their own little corner on the market. There are also attempts to resolve the issue using software instead of hardware means, like redirecting calls for example. In the lines to follow, we are going to show you all the ways to get around having two handsets. Some of them, we hope, may prove useful to you.

The first and simplest solution was a dual SIM holder, which allows you to connect two SIM cards to your card slot. It is by far the cheapest of options but it does not even come close to fully solving the problem. The main flaw it has is that it does not really work with both cards simultaneously. Instead one SIM is operating at a given time while the other, which is referred to as ghost-SIM, is unusable. The user is able to alternate the two by turning the phone off and then back on. Not a great improvement compared to carrying the second SIM in your wallet and changing it when necessary. It only saves you the effort to remove the back cover and battery, reducing the replacement time by a couple of seconds or minutes, depending on you phone's design and the time it needs to turn off and then back on. The other major downer is the holder size. Quite bigger than a normal SIM, it just won't fit in some handsets. All in all, this solution is only applicable if you use the alternative SIM card rarely or you use it only for those casual outgoing calls. 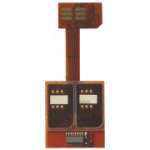 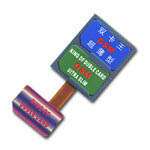 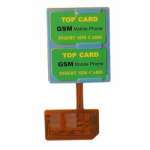 This is what most Dual SIM holders look like.

Basically, adapters do not differ much from holders, as they function in pretty much the same way. The main difference, which is to say, the major benefit is that the dual SIM adapter is the same size as a regular SIM card and therefore can fit in any phone. On the other hand, fitting the two SIM cards in the module can be a challenge as you need to extract the actual SIM chips out of their plastic beds and then place them in the adapter. Cutting and puncturing your cards involves a certain level of risk. Fortunately, most dual SIM adapter dealers will do that for you upon purchase. Some more recent models allow switching between the SIM cards without turning the phone off. Instead, a switch SIM option appears on the phone menu. Yet, you still can't use the two SIM cards simultaneously. The other bad news for those considering SIM holders and adapters is that neither option will do much of a job on a locked phone, unless both cards used are of the same carrier. 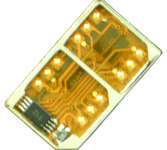 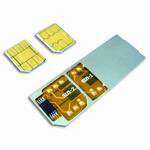 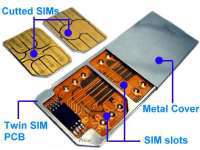 The first reportedly dual SIM mobiles turned more of a marketing gimmick than the Holy Grail for people with too little space in their pocket. They were claimed to have two SIM card slots, and they did! But only one could be used at a time. So no great improvement here, except that alternating the cards was possible without turning the phone off. Plus, fitting both SIM cards into the phone wasn't that much of a burden any more - so much for cutting and clipping. Also, the dual SIM phones are never carrier-locked, which is a real load off. Falling just short of a breakthrough, these forerunners were a promise that a device able to operate with two SIM cards simultaneously was on the way.

Putting some thought on it, some people came with the idea of mechanically connect two mobiles in a way that will allow using both. One of the pioneers was the WND Telecom. Their Wind DUO 2000 did have decent looks on top of doing the job it was designed to. Although not exactly a top class feature-rich phone, it was adequately sized and reasonable. Another, more recent, addition to the dual phones ranks - the iCool G700 - was a clamshell with two SIM cards. In fact it's another combination of two phones, each with its own screen and keypad, only using the same battery. The Wind DUO Atom is probably also worth mentioning here. It's been announced and should be coming soon, but we'll get back to that later in the article. One thing we have to admit: though a little odd-looking, these phones are up to their task and they manage to deliver.

Finally, we come to the latest release - an actual dual SIM card phone. Not just one that can store two SIMs, but one that is actually capable of operating them as easy as one-two-three. And we had our hands on one of these. Manufactured by CECT, now one of the best known Chinese mobile phone makers, this device claims to be as good as two separate handsets, packed in one. It is indeed a very compact and quite tasteful bar. Well, probably not the LG Prada or Nokia Sirocco stuff , but honestly, we've seen way worse by far better-rated makers. Stay with us while we check how good it is at handling its two SIM cards. See if it's the dream solution to your two-handsets-are-too-much-for-my-pocket problem.

There is a possibility that we can link two different numbers to one SIM CARD , this can be provided by Mobile networks. Does anybody know how does it work?

I am very happy with my simore Infinite dual sim adapter in my galaxy Note. http://youtu.be/IjARGF-j7zQ

I have a Dual SIM Adapter from Simore of the type Infinite Light installed in my Samsung Galaxy S smart phone. The installation was easy and it immediately worked. However, switching between the two SIM cards takes ages (somtimes in the order o...