Fortnite gets 60fps support on iOS

Epic Games has released an update for Fortnite for iOS, which has added the option to run the game at 60 frames per second. This option is currently only available on the iPhone XS, iPhone XS Max and the iPhone XR.

Previously, Fortnite was limited to running at either 30fps or 20fps on mobile. The frame rate option can be found in the same place as before, except it now goes all the way up to 60.

However, it seems that may be for a good reason. I tested Fortnite on the iPhone XR at three presets, low, medium and high (epic is not available). I first started the game high setting and predictably the game looked really nice, especially with the 60fps frame rate. Just by eyeballing, it seems that the game was hitting its 60fps target at this preset, and everything seemed fine at first. 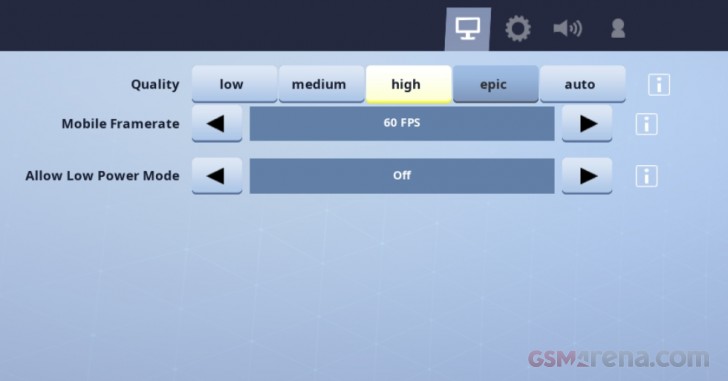 Then things started heating up, and I mean that literally. The iPhone XR got incredibly hot while running Fortnite, which after a few minutes of playing caused the chipset to throttle and drop the frame rate. After that, it seemed as if the frame rate was back to being close to 30fps most of the time.

This is different from PUBG. For starters, the iPhone XR doesn't get hot at all while playing PUBG regardless of preset or frame rate. Second, PUBG only lets you play at 60fps on its lowest preset, so there isn't a lot of load on the device to begin with. Lastly, PUBG keeps the rendering resolution the same across all graphical presets while Fortnite drops the resolution at medium compared to high with low setting basically looking like Minecraft.

In my experience, it's best to stick to the medium preset if you wish to play at 60fps on these devices, as it's the most balanced in terms of performance and visual quality. I hope Epic Games optimizes the game further, as this level of device heating is unacceptable for a game that looks as simplistic as Fortnite. Not to mention, it tends to burn through your battery.

Having said that, 60fps option is a literal game changer. With higher frame rate comes reduced input latency, which translates into direct competitive advantage. Owners of XS, XS Max and XR now have an actual advantage over other iPhone owners and Android users. You even get more fluidity over the Switch version, as Nintendo's console only runs Fortnite at 30fps, although it does have physical controls to make up for that.

So a good update in terms of gameplay performance but definitely needs more optimization to reduce heating and battery consumption. As for an Android update, no word on that yet.

I based it on the antutu scores. assuming the scores are comparable. that's all.

Yeah buddy, I don't think anyone believes you here. Besides everyone here is forgetting that Fortnite was a game: - developed for Windows 10 (think Core i7-7700k, GTX 1070) - then it was scaled-down and ported to the consoles PS4/Xbox One (F...

Wow.... I can't believe a phone is running fornite at 60fps. imagine this in a fan cooled Console like a switch! It'd be freaking incredible!