Remember the renders of a Motorola smartphone with four cameras AND the moto logo in a humongous rectangle setup? It was rumored to be called Moto One Pro, but latest leak says the name will actually be Moto One Zoom.

One of the shooters will be of the 48MP Quad Bayer variety, while the screen will be with a normal notch, unlike the Moto One Vision and the leaked Moto One Action. 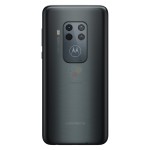 The writing on the back says the 48 MP camera will have 1.6 µm size pixels, but that's actually referring to the size in binned 12MP mode. Two such sensors are widely available currently - Sony IMX586 and Samsung ISOCELL Bright GM1 sensor. We are also looking at dual OIS, meaning the secondary shooter is a telephoto camera as it's the one to benefit from stabilization.

The front also reveals the aspect ratio is shorter than other recent Moto One smartphones. We are looking at a 19.5:9 ratio and not the 21:9 cinematic view in the more affordable devices.

We assume it is a bit more expensive, given the lack of a visible fingerprint scanner, meaning it made its way under the OLED panel.

The renders also reveal the volume and power keys are on the right, the 3.5 mm audio jack is safe and sound on the bottom, right next to the USB-C port. One thing that is missing is a speaker, so don’t expect stereo sound from the Moto One Zoom.

Launch is reportedly coming at IFA 2019 in the first week of September with pricing said to be €429.

Lol what a ugly back design