The popular German foundation Stiftung Warentest, which is the regional authority on consumer product testing accommodated the recently unveiled Apple iPhone 4 in its lab and tested its notorious antenna performance. And no-one will be surprised to hear that the iPhone 4 failed to impress the guys who tested it.

According to the Stiftung Warentest, only a touch of a finger over the antenna gap in the bottom left corner is enough for the iPhone 4 to lose up to 90 percent of the signal. And, depending on the strength of thе network signal, that can easily lead to dropped calls. As for web browsing, Internet connection gets "painfully" slow when you position your hand over the soft spot. 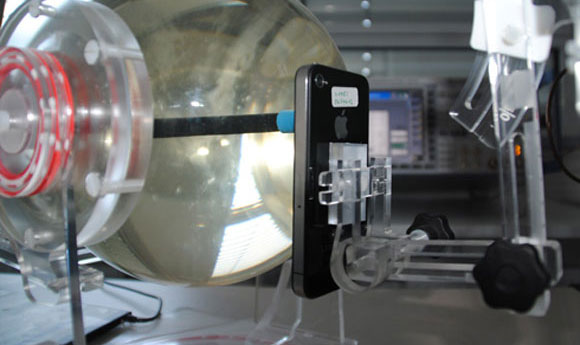 The foundation repeated the test using two other smartphones (those remain undisclosed, though) and this time the signal went down by only 25 percent. So, even if those two were affected by signal reception issues, their reception was still good enough to prevent dropped calls.

So, as it turns out, Apple is right: other devices lose signal as well. But what about the dropped calls? Nope, the Antennagate saga ain't over yet.

I really wanna use iph 4 but i am afraid of that trouble. hope everything will be good.

When will the life extension app be available for all the people with no lives.