Last week, some users of Android phones reported that they were shown a message, blocking users out of using Google Apps. This was happening particularly to those who were using smartphones with unlocked bootloaders or running a custom ROM.

Today, Google has confirmed to Android Police the statement in which it acknowledged this practice.

Certified Android devices offer users consistent experiences when using apps from Google and the Play Store [ as well as Google Play Protect]. We acknowledge that some manufacturers are building and selling devices that have not been certified by Google.

This means that from now on, devices that are not certified with Google will be explicitly exempted from signing into Google Apps. In order to save them the hassle, some sketchy smartphone manufacturers either dont adhere to Googles hardware guidelines or simply would rather not go through the trouble of certifying devices for whatever reasons.

Cost isnt one of these reasons, as getting hardware certified doesnt cost manufacturers anything. Some of these manufactures might be more concerned about pumping out low-quality devices and would rather skip out on getting them certified. 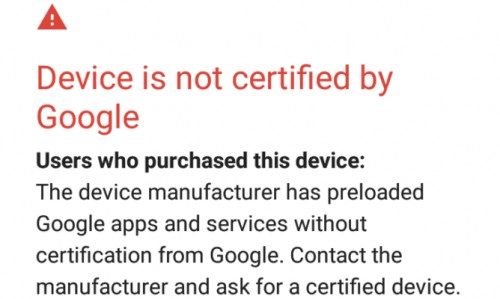 This would include smartphones that are running custom ROMs, since they arent officially sanctioned by Google. Using a device with an unlocked bootloader might trip Google as well. In order to continue using a device with Google services that is running unofficial software, you will have to acknowledge that your device isnt certified and Google will let you exempt your device by submitting a request with an IMEI number or the Google Services Framework ID from your phone.

Google will only allow you to use 100 exemptions per Google account, so its possible that factory resetting a custom or unofficial ROM will count against your 100 allowed exemptions.

The reason behind Google cracking down on unofficial devices or software is simple. Google wants devices that carry the Android name to consistently adhere to Googles guidelines. It would also help consumers identify counterfeit smartphones or those that may pose a security threat.

Check out Android Polices post in the Via link for more specific details on how to exempt an uncertified device.

This might just be the easiest way to disable all the spying by default. It takes days to turn off most of the spying that occur by default. Why are the default options in Apps almost always the opposite of what they should be?

So after waving the 'Open OS' flag for years, they're slowly choking up things? Thats so Google!

Cheap phones? There are many good phones available. Don't want to spend too much? Flagship isn't for you. Just buy any mid range phone from big brands or even low end. But not craps like Micromax or Vivo or Blu...