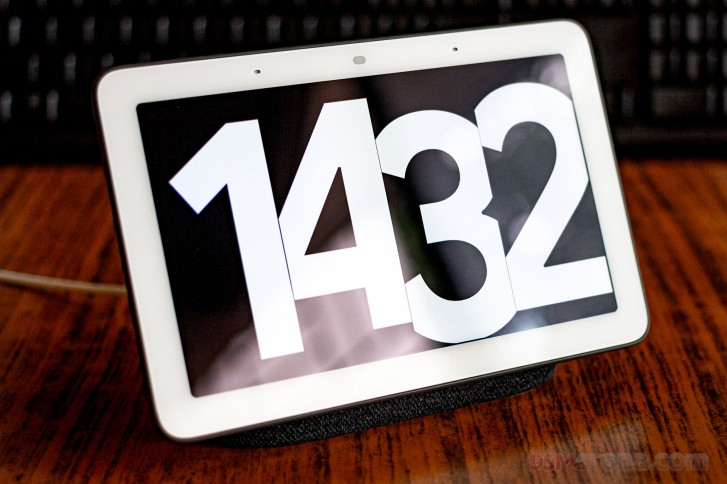 But before we get into that, let's talk about the design. The Nest Hub has a very contemporary look that will look great anywhere it's placed. It has a floating display design, where the angled 7-inch touchscreen sits atop the base, which remains partially hidden. The display has two far-field microphones above it along with an ambient light sensor. 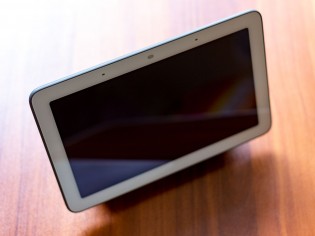 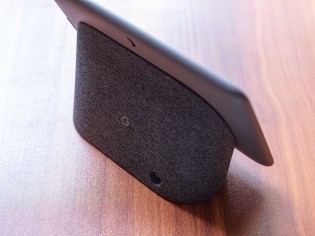 On the back, the Nest Hub has a sliding switch to disable the microphone as well as volume buttons, both of which are easy to operate without looking, although the volume buttons do feel flimsy and loose as they creaked and moved about whenever they were operated. Using the microphone switch is followed by an audio warning that the mic has been turned off or on and an orange LED lights up on the front to inform you whenever it is off.

The base has a fabric covering the entire surface, which hides a single full-range driver underneath. There's also a connector for power. Unlike the Amazon Echo devices, the Nest Hub does not have an audio jack for connecting to speakers. 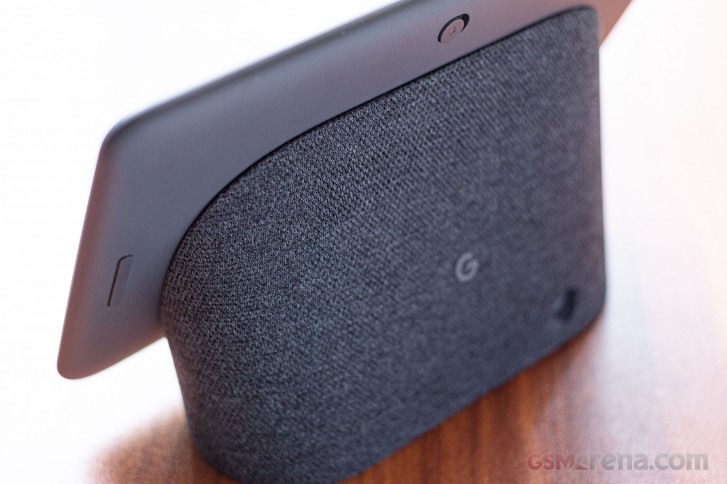 The display on the Nest Hub is the main feature here. The 7-inch panel has a resolution of 1024x600, which is plenty for a device that will always be over an arm's length away. The display actually looks fantastic, with sharp text and detailed images.

The display also has a trick up its sleeve. Using the ambient light sensor on top, the Nest Hub can adjust both the brightness and the color temperature of the display. It does this so no matter which room or lighting the device is in, the photos always look like they are printed on paper. In a dark room, the display can dim and can also be set to turn off entirely.

Compared to the recently launched Amazon Echo Show 5, the display on the Nest Hub is far superior. Not only is it larger, which makes it more usable from a distance but it's also sharper and generally better quality.

Moving on to the software, the Nest Hub has a rather barebones interface. That's because unlike Amazon, Google chooses to let the user adjust most of the features of the Nest Hub through the Google Home app rather than from the device itself.

On the device itself, you can do some things, such as check on all of your connected smart home devices by swiping down from the top of the display. You can swipe up to access basic controls, such as brightness, volume, do not disturb, alarms and settings, which isn't really settings at all as it doesn't let you change anything but just shows you information like the connected Wi-Fi, the device name, the software version it's running and the IP address.

The homescreen can either be photos from your Google Photos library, a selection of curated photos from Google, a clock face or photos from your Facebook and/or Flickr account. The first option turns the device into a digital photo frame as it can show either one image or cycle through an album and show all of them. The same is true for the Facebook/Flickr option as well.

The Art gallery option finds curated images from Getty images, Google Earth, NASA and more sources and cycles through them on your homescreen and you can choose the source. Lastly, the clock option shows one of the eight preset clock faces all the time. There's actually only four clock faces with a light theme and the other four are the same with a dark theme. The clock faces are nice but four is a bit too few. In comparison, Amazon offers dozens of options for clock faces on the Echo Show and Echo Spot devices.

The UI on the Nest Hub is very user friendly and also generally very attractive, much more so than that on the Echo devices, which although not unattractive is a bit pedestrian in comparison. Also, compared specifically to the new Echo Show 5, the Nest Hub is also far more responsive and smoother in operation when using the touchscreen.

When it comes to using with voice, your mileage may vary but I personally find Google Assistant leagues ahead in the way it understands queries. Compared to Amazon, Google has some advantages, such as having the world's most popular search engine and also access to a lot more of your data through your Google account. This lets it be far more precise and relevant whenever it responds to your queries.

But an even bigger advantage for Google comes in the form of YouTube integration, which means you can just search for any video on the world's largest video service and have them play on the Nest Hub's 7-inch display. You also have full access to YouTube Music on the Nest Hub without having to pay for it, with the only limitation that you can't minimize the player on screen like you can with other sources, such as Spotify.

It's also a bit annoying that it won't show you your particular subscriptions and playlists from your YouTube account but still, it's only a small inconvenience. 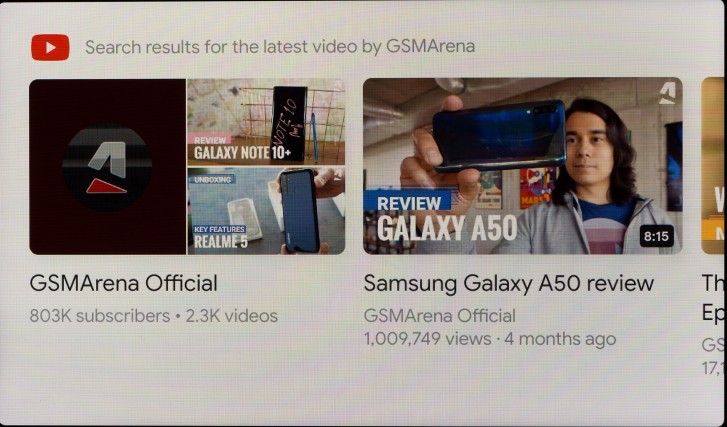 The Nest Hub also acts as a Chromecast device, which means other devices can cast to it. If you're on the same network, you can cast videos and music to the Nest Hub from other devices, such as your smartphone and it works the same way as Chromecast. The content will play on the Nest Hub's display and speakers. The only services that won't let you do that are Netflix and Prime Video but that's a restriction from those services, not Google.

Unfortunately, while the Nest Hub's display is perfectly fine for watching content on it, the speaker is quite underwhelming. The single speaker on the back tries its best but it still comes across as a single, small speaker. For casually listening to music at low volume, watching YouTube videos or listening to audiobooks and podcasts, the speaker is perfectly adequate and also gets reasonably loud. But if you want a proper set of speakers to play your music then this isn't it. There's also no audio jack on the Nest Hub but you can pair speakers or headphones to it using Bluetooth.

As for smart home devices, they will all require a hub as the Nest Hub, despite its name, doesn't actually have a smart hub built-in. But once you do connect those devices to their respective hubs then it's relatively easy to get them connected to the Nest Hub using the Google Home app. After that they show up on the device and can be accessed using your voice. Also, because the Nest Hub has a display, you can also use devices such as smart doorbells, security cameras or baby monitors and have their feed show up on the screen. 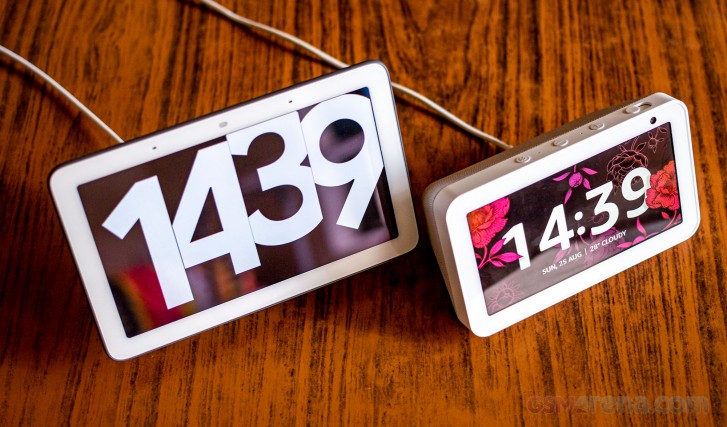 Bottom line then, we think the Google Nest Hub is a very good device. The display is excellent and great for showcasing photos or watching recipe videos in the kitchen. The UI is attractive and easy to use and perfectly integrates all your smart home devices. Google Assistant also works phenomenally well most of the time and if we could just have one AI assistant, this would probably be it.

The only downside we can think of is the lackluster speaker. Google does offer the Nest Hub Max, which has a larger display, a video camera and more importantly, better speakers but it's not available in all regions, including India where the Nest Hub is launching today.

Compared to the Amazon Echo Show 5, the Nest Hub is undoubtedly better, with a larger, more usable display, the generally preferable Google Assistant and also integration with Google services, including YouTube and Chromecast. The Echo Show 5 does have a camera but we don't see much value in that, although your mileage may vary. It also has a marginally better speaker but still not particularly good. It does have a good ol' fashioned audio jack though, which is a curious omission from the Nest Hub.

Overall, we think the Nest Hub is a really good option for those looking for a smart home device with a display or even just a digital photo frame but with a few extra perks built-in.

I purchased one back in May. I really like it. Especially when you can use nothing but your voice to control it, your home, play music, videos, and a lot more. Netflix is suppose to be coming as well. The other thing is more and more voice a...