Xiaomi Mi 11 Lite recently starred in a couple of hands-on photos revealing the design but information about specs has been rather scarce. An early rumor suggested that the Mi 11 Lite will feature a brand new Qualcomm SoC, but the Google Play Console listing says otherwise. 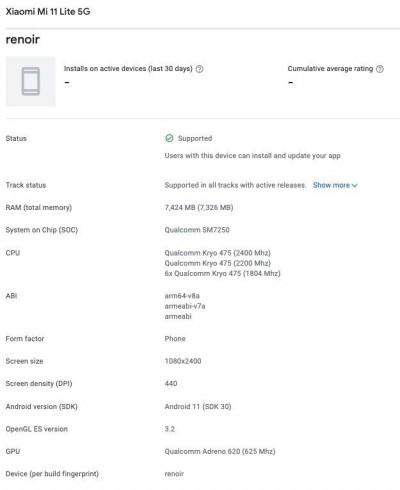 A screenshot from the Google Play Console listing

The listing reveals the code name "renoir" as well as the model number M2101K9G. The chipset's model number coincides with the Snapdragon 765G and so do the core configuration and clocks. Memory configurations will surely vary but an 8GB RAM variant will likely make it to the market.

Sadly, that's all the listing was able to unearth but if previous reports are anything to go by, we should expect a 4,150 mAh battery powering up the device supporting 33W fast charging. Other memory configurations include either 64 or 128GB storage and the base amount of RAM is supposed to be 6GB.

True many other companies do

probably clearing up their inventory