6.67-inch LCD is adequate for the money 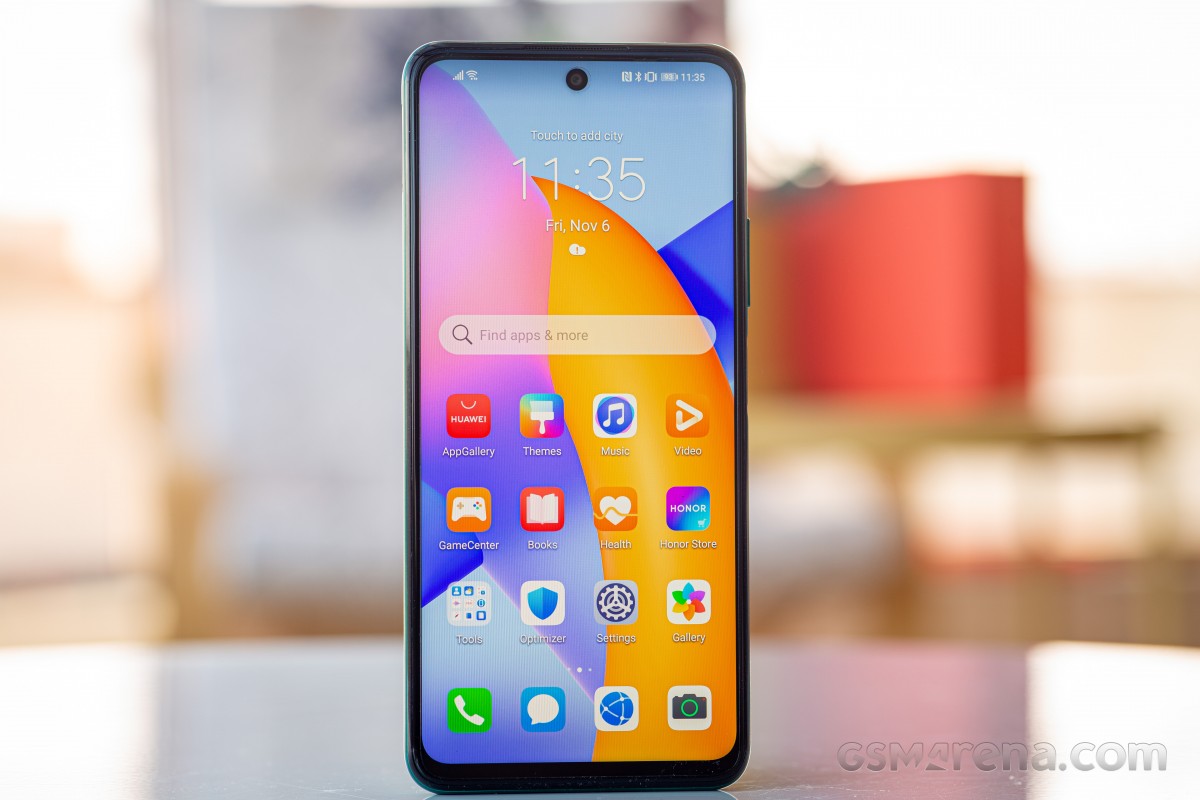 We measured a maximum brightness of 426nits on the 10X Lite, a few nits less than what we got on the seemingly identical P smart 2021 and a relatively modest number, particularly for an LCD. We also didn't see any boost with adaptive brightness enabled.

Black levels are reasonably well contained, and this results in a contrast of around 1200:1 - about average for a modern-day LCD.

Color reproduction is handled in a way familiar from previous Huaweis and Honors. There are two modes - Natural and Vivid, each with a Default/Warm/Cool selector and a color wheel for custom settings.

The 10X Lite comes with Vivid mode pre-set out of the box. With the 'Default' setting for color temperature, we measured an average dE2000 of 5.4 for our set of DCI-P3 test swatches, and a noticeable blue shift - white was about 8 units off the target, so slightly better than the P smart. The 'Warm' setting actually made things worse for white (dE2000 of 15 and a strong green tint), and the average deviation increased to 5.9. However, playing around with the color wheel got us a very accurate white point (dE2000 less than 2) and a reasonable 2.9 average.

Normal mode is the one for sRGB content, and it's good enough with the 'Default' color temperature - 2.1 average dE2000 and only slightly reddish whites. 'Warm' was markedly worse, yielding a 7.8 average and a very yellow white point. However, with a custom setting on the color wheel, things got as close to perfect as we can hope for - a close-to-ideal white point and an average dE2000 of 1.6.

The Honor 10X Lite makes no HDR claims, and its display has no HDR capability.

The 10X Lite has a 5,000mAh battery inside, a generous capacity in general, and more or less the standard for the segment - the Poco X3 NFC has a marginally bigger 5,160mAh cell, the Galaxy A31, and the Realme 7 match Honor's number.

In our testing, the Honor posted excellent numbers, with small differences here and there compared to the P smart 2021. Half an hour longer in the video test but an hour less in web-browsing is what we got on Honor, and voice call longevity is ever so slightly worse. Overall, the Honor 10X Lite posted an Endurance rating of 114 hours. 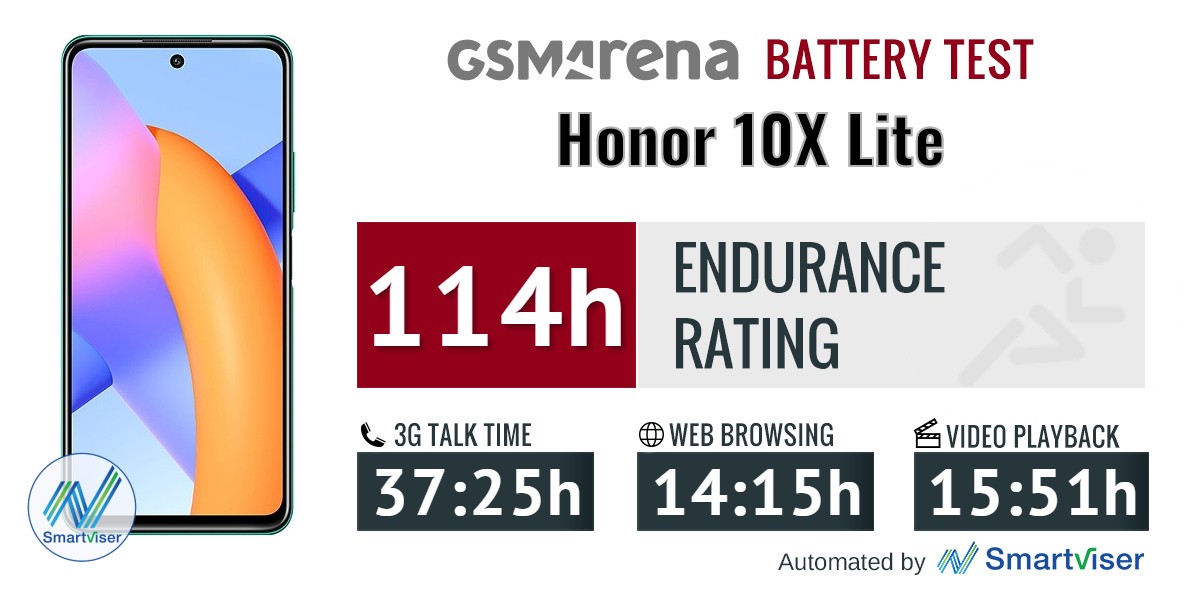 Our battery tests were automated thanks to SmartViser, using its viSer App. The endurance rating above denotes how long a single battery charge will last you if you use the Honor 10X Lite for an hour each of telephony, web browsing, and video playback daily. We've established this usage pattern so that our battery results are comparable across devices in the most common day-to-day tasks. The battery testing procedure is described in detail in case you're interested in the nitty-gritty. You can check out our complete battery test table, where you can see how all of the smartphones we've tested will compare under your own typical use.

The Honor 10X Lite comes bundled with a Huawei SuperCharge 22.5W adapter, a reasonable middle ground for a phone in this price bracket. Oddly enough, it was a few minutes slower from zero to full than the P smart 2021, yet it had 5% more at the half-hour mark. Realmes are champs at charging speeds, particularly in this segment, though Xiaomi competitors are also quicker to top up than the Honor. Samsung's entries in the class are nowhere as fast, though.

The Honor 10X Lite has a couple of features to prolong the battery's health over time. One of these is Smart Charge that will delay topping up to 100% depending on your charging habits. Unlike Sony or Asus, there are no settings for this one where you can dial in full charge target times or tie it to your morning alarm - it's just a simple on/off toggle (on by default, by the way). But if the flagship Mate 40 Pro doesn't let you customize that, we wouldn't expect it from the P smart, right?

Smart Battery Capacity is also here - it limits full charges to just short of the battery's top capacity so that your lithium-ion battery doesn't stay at maximum charge, which is detrimental to its long-term health.

The Honor 10X Lite has a single speaker firing out of the bottom of the handset - the default setup for the segment, though the Poco X3 NFC and some Motos in this price ballpark have stereo speakers.

The phone posted an 'Average' score for loudness in our speaker test, much like it's cousin P smart 2021, only marginally quieter. Quality is nothing special either, and if speaker performance is important to you, you should probably look at the Moto G8 Power and G Pro or the Poco X3 NFC.