The Honor 20 Pro has a 6.26-inch IPS LCD panel with a punch-hole front-facing camera design with fairly thin bezels all-around. Unfortunately, for a flagship device, we expected OLED but costs had to be kept down. Regardless, this LCD offers pretty good image quality overall. We did notice, however, a small light bleed around the camera hole and the chin. It's not as prominent as on the Honor View 20, but it's there. 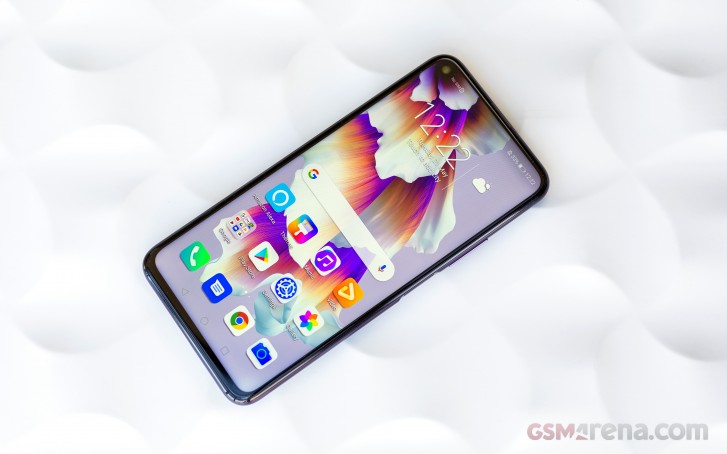 Our tests show that the screen can go up to 485 nits of maximum brightness and if you set it on Auto mode, it can boost just a tad more - up to 507 cd/m2. That's enough for fairly comfortable outdoor use as at these brightness levels, sunlight legibility is good. Still, it's not the highest we've seen for sure.

Our testing took us further and checked color accuracy as well. Out of the box, the phone is set to Vivid mode, which has blue-ish whites and the average dE2000 is 6.4. Switching over to Normal mode will adjust the color temperature aligning with the most common neutral white point (D65) in sRGB mode. The average dE2000 goes down to 1.7, which is a great result if you are looking for good color accuracy.

Once again, we wished that Honor used an OLED considering the asking price of the handset although, less pretentious users won't mind the IPS display - it's a decent one after all.

The Honor 20 Pro adopts a 4,000 mAh battery - a fairly generous amount of juice but not a record-breaker, that's for sure. On the other hand, the results from our tests are exceptional. Regarding the screen-on tests and the 3G talk time, the Honor 20 Pro got almost identical scores to the Honor View 20, which has roughly the same display, the same 4,000 mAh unit inside and a Kirin 980 chipset running the show. However, the Honor 20 Pro's overall battery endurance score is higher mainly due to its impressive standby readings. An overall endurance score of 104h is downright impressive and puts it near the top of our battery chart. 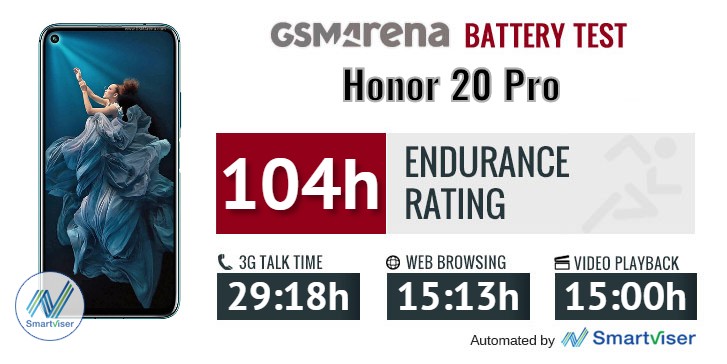 Our battery tests were automated thanks to SmartViser, using its viSer App. The endurance rating above denotes how long a single battery charge will last you if you use the Honor 20 Pro for an hour each of telephony, web browsing, and video playback daily. We've established this usage pattern so that our battery results are comparable across devices in the most common day-to-day tasks. The battery testing procedure is described in detail in case you're interested in the nitty-gritty. You can check out our complete battery test table, where you can see how all of the smartphones we've tested will compare under your own typical use.

In terms of charging speed, the Honor 20 Pro comes with a 22.5W-capable charger in the box that can get you from 0 to 48% in just 30 minutes. Surely, it's not the fastest charging tech we've seen but it's not too shabby as well.

The Honor 20 Pro has a bottom-facing loudspeaker, which sounds okay if you keep the volume at normal level. As it increases, it starts to ring. And as far as loudness is concerned - it's definitely not the loudest one around but it gets the job done.

The Honor 20 Pro did not get a good start in our audio quality test. While just about every phone these days has stellar scores for clarity when hooked to an active external amplifier the 20 Pro was mediocre at best with both harmonic distortion and intermodulation distortion way above normal. Their stereo crosstalk was disappointing too and when you factor in the only average loudness, it’s a poor performance here.

Curiously things improved when we plugged in our headphones - stereo crosstalk slightly improved, the harmonic distortion was gone and the intermodulation distortion is less than half what it was in the first test. The new numbers aren’t great, but at least they are decent. Sadly, the loudness dropped a little to below average so it’s not all good.