The HTC Touch Diamond offers generous amount of storage - the 4GB available may probably make up for the lack of a memory card slot for some.

The WinMo file manager on the Diamond

Unfortunately, the lack of a card slot might be an issue for those who have purchased software that ships on a memory card and that can be run only from that memory card - most GPS navigation applications are a good example.

We tested the read/write performance of the Touch Diamond both against software benchmarks and in real life tasks. Both tests gave similar results so we are publishing only the real-life one.

We concluded our real-life test on a Windows XP-based PC paired with the Diamond in USB Mass Storage mode. Overall, it showed really nice results in the Read operation (copying from handset to PC). However the Write operation was three times slower. Here are the results:

Bear in mind that those figures will be lower on a Vista-based PC for some Microsoft-only-knows-why reason. That's another story entirely and we'd rather stay out of it.

Once the image is opened, you can make use of the auto screen rotation feature to view it in landscape mode or you can zoom in with a circular gesture on the display (it's TouchFLO, baby) or on the scroll wheel. Once you zoom in on the image you can start panning by holding your thumb down for a second, or you can use the D-pad. The Albums application also offers a customizable slideshow.

Scrolling to the next image is a matter of a single finger sweep and it's almost instantaneous. The image viewer actually has the same functionality as in the HTC Touch Cruise.

Thanks to the built-in accelerometer, switching to landscape mode is seamless.

Opening an image in landscape mode • zooming in

It's got to be said that the Touch Diamond has a certain advantage over competing devices when it comes to image browsing since this is one of the applications where VGA does count big time. The images look great on the high resolution screen.

And there's an iPod-style music player

The Touch Diamond has a good music player, which makes heavy use of album art. The music player is accessible straight from the TouchFLO home screen with cool Apple-like cover flow animation for you to pick an album.

In case you want to filter tracks by other criteria beside album, the Library shortcut will take you to the player backend where you can sort music by artist, genre, composer, purchased tracks or simply create custom playlists. The visual interface of the library is fluid and stunningly reminiscent of iPhone's very own music player.

Unfortunately, there is no 3.5mm audio jack on the Diamond or on its headphones, so unless you get hold of a third-party adapter, you're stuck with the supplied headset, which - simply put - sucks. The headset does look good, but listening to music is not among its strengths - it's best left for making phone calls.

Windows Mobile devices have never been known for even decent audio output. Their business mindset has so far served as a good excuse for the poor audio. However, since the Diamond is now considered a multimedia device as well, it is about time this changed.

Well, in reality it's arguably up to the task in terms of audio quality. The HTC has some nice IMD and THD levels but somewhat fails in terms of frequency response.

It seems as though HTC have put some sort of high-pass filter in the Touch Diamond, hence the frequency response graph you can see posted below.

However you can see for yourselves that the Diamond is nevertheless a real step up in audio quality from previous Windows mobile devices we have tested. Anyway, they are still behind the best music phone standards. 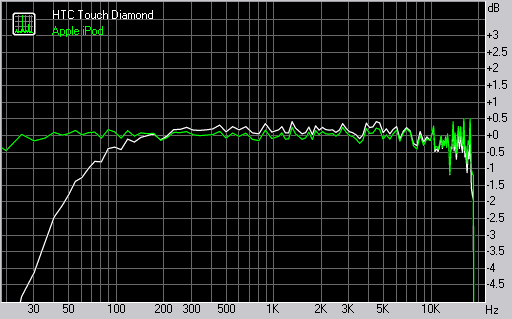 There's an FM radio, too

The Diamond built-in FM radio naturally requires the headset to be plugged-in. As we already told you however, you would be better off using a third-party headset with some sort of 3.5mm audio adapter, as the original set is not well suited for listening to music.

Nevertheless, the Touch Diamond FM radio has an excellent interface much like the rest of the multimedia players on board and offers memory for some 20 radio stations.

The FM Radio on the Touch Diamond

RDS is available too - so overall, it's a nice implementation.

The HTC Touch Diamond has a nice video player but it only supports the video/audio codecs available to Windows. To enjoy a more versatile video support on the Diamond (DiVX or XViD for example), you will probably need to purchase a dedicated video player, which has support for more file types than the stock variety.

Playing video on the Diamond

We resorted to the well-known Core player, since the free TCPMP player didn't run on the handset, probably due to some compatibility issues with Windows Mobile 6.1.

The HTC Diamond is pretty good at near VGA-res XviD video playback - we played an XviD encoded DVD rip for PC playback and, luckily, there were no skipped frames. Credit probably goes to the dedicated graphics chip. We are glad that HTC have finally sorted the video performance issues that plagued the Touch Cruise and the TyTN II.

The Diamond VGA display did count here: the video looked excellent, well ahead of other devices. We guess the Diamond is a sealed deal for movie aficionados if display size doesn't bother them.