Finally someone's done it - HTC made a transparent-backed phone. Well, partially so, and only in one of the colors, but it's something. Here it is. 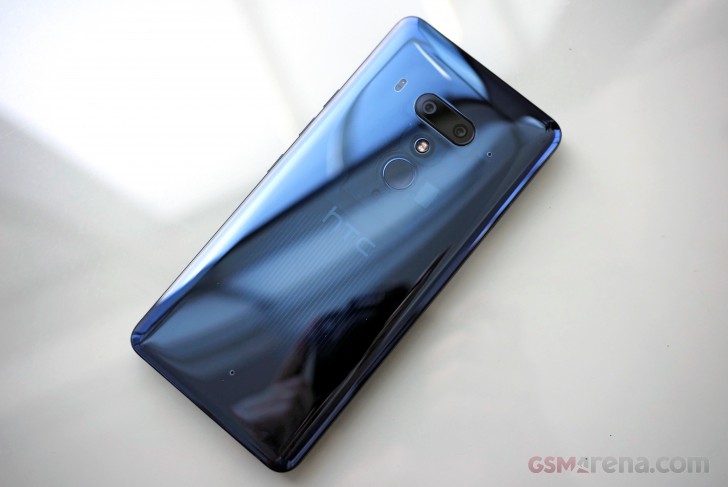 Obviously other colors are available too, and all of them come with what HTC calls 'Liquid Surface' finish. It could just as easily be called 'surface, where fingerprints come to stay', but we'd be the first to admit it doesn't have quite the same ring. 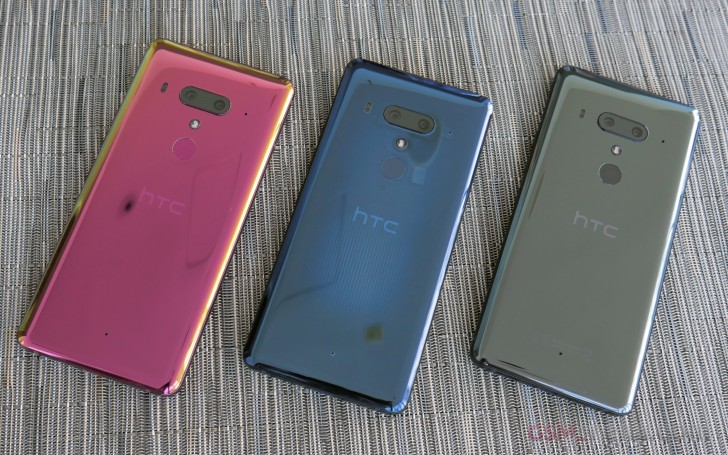 There's no denying the mirror back of HTC U12+ looks flashy and eye-catching. Put a Galaxy S9+ next to it, an otherwise attractive handset, and it all but disappears in the presence of the U12+. 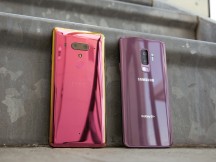 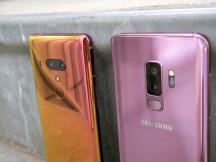 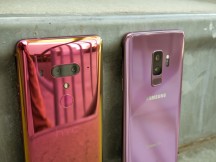 HTC has been doing the Liquid Surface thing for a while now, starting with the U Ultra and the U Play early last year. The U11 then followed, adopting the same design, but don't just take our word for it - here are the two side by side. 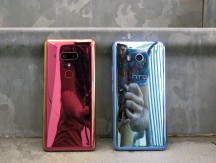 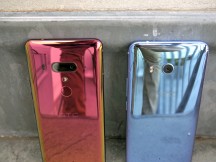 HTC was among the first to explore multiple cameras back in the day (some 4 years ago), but the U12+ is in fact the first global flagship from the company with a true dual camera setup, as opposed to the depth sensing secondary module of that One (M8). 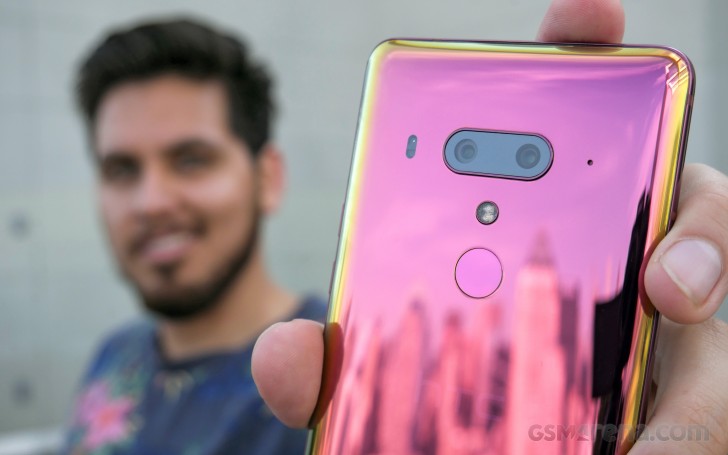 We're not entirely sure we love the arrangement of all the bits and pieces on the back - there's just too much stuff, and it's a bit scattered. The dual LED flash is below the camera assembly, the laser autofocus emitter and receiver are to the left, a mic is on the opposite side, and the fingerprint reader is further below. And there's even an extra mic all the way down.

Over at the front, things are much cleaner - no notches, no logos. Not even rounded corners actually - just a fully rectangular 18:9 QHD+ Super LCD 6 panel. There's now even an always-on display with a clock and notifications - the usual stuff. 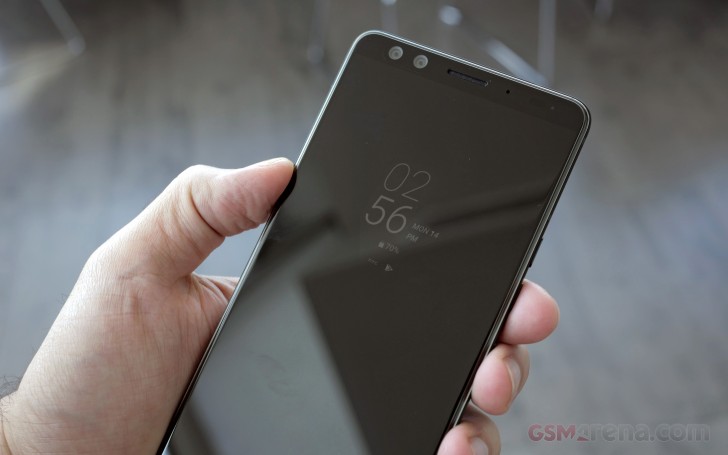 HTC has even trimmed the bezels, if only ever so slightly - the new phone measures 156.6 x 73.9 x 8.7 mm so that's a full millimeter narrower, and almost 2mm shorter compared to the U11+. 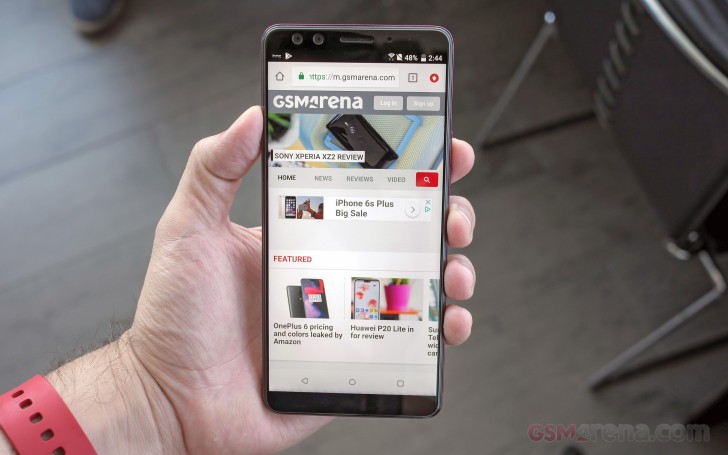 The marginally smaller forehead is now home to not one but two front-facing cameras. The two are the same, so no telephoto selfies (like anyone asked for those), but also no ultra wide ones - large groups of friends and scenery to put your mug into context are two use cases that come to mind. The earpiece also serves as one of two onboard speakers. 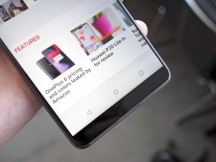 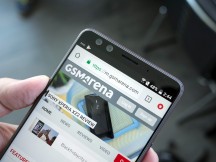 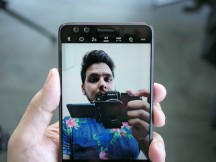 Nothing below the display • A couple of selfie cams on top

What you won't find on the HTC U12+ is a headphone jack, but that shouldn't be a surprise - HTC did away with it on the U Ultra, and there's no going back. This was justified with the noise-cancelling USonic buds that HTC threw into the bundle - a unique feature to have out of the box.

There will be a USB-C to 3.5mm adapter included (still) for connecting your legacy wired headphones. You'll find yet another mic on the bottom, as well as the primary speaker of the BoomSound pair. The fourth and final mic is the only thing on the top edge of the phone. 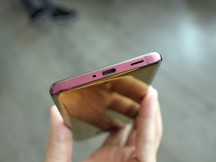 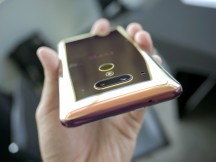 Microphone, USB-C port and primary speaker • Yet another mic on top

On the right side of the phone is where the power and volume buttons are. Are they really buttons if they don't click though? Debatable, but the point is the controls are pressure sensitive and the phone reacts with a buzz of the vibration motor - think iPhone's non-button home button. HTC says it went through some extensive testing to determine the exact pressure point, and some of us found the buttons too sensitive, others thought it was just right - you really can't please everyone.

Perhaps the best bit about the U12+'s buttons is the fact that they don't introduce structural weaknesses to the phone - no buttons means no holes, means no bending. 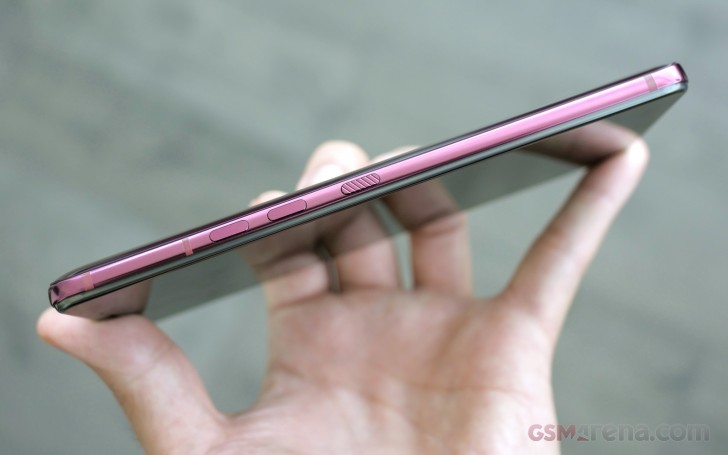 The buttons aren't the only pressure sensitive thing about the U12+ - in fact, most of the U12+ is pressure sensitive and you can squeeze it to make it do stuff for you. It's called Edge Sense 2.0, the feature differentiates between a quick press and long press, and double tapping either edge will trigger a one-handed mode with the interface shrunk towards that side.

A feature at least one of is super excited about - if you're holding the phone in portrait and you're touching both edges, the interface won't go into landscape if you lie down and rotate the phone. No more switching the auto rotate on and off when in bed. Also, if for example you're on Google Maps and navigating your way around a city, the U12+ won't go into standby while you're holding it. These are all optional and can be switched off, of course.

In as few words as possible, we kinda like it, the HTC U12+. It's by no means radically different from the U11+, but we've learned not to expect major changes, and no notch is always a welcome lack of change. With dual cameras front and back, the new model is no longer underequipped to fight the competition in the faux bokeh area, and the edge squeeze features can actually be useful, sometimes, maybe. 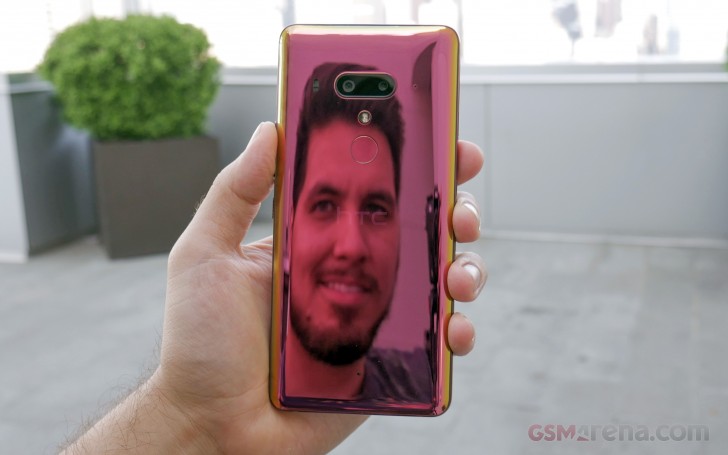 Of course, we'd need to spend more time with a review unit running final software to see if 'kinda like it' can turn into a recommendation. As it stands right now, we're just cautiously optimistic. Stay tuned for more!