Huawei will unveil the Kirin 990 simultaneously in Berlin and Beijing

Huawei CEO Richard Yu will hold the opening keynote of IFA 2019 and is expected to unveil the Kirin 990 chipset (last year he presented the 980). This will happen on September 6, just hours before Qualcomm’s own keynote, which will focus on 5G.

There’s a rivalry brewing here. The keynote in Berlin will be under the slogan “Rethink Evolution”, but Huawei has scheduled a separate event to be held in Beijing at the same time. The theme of this one is “Reconstruction”. 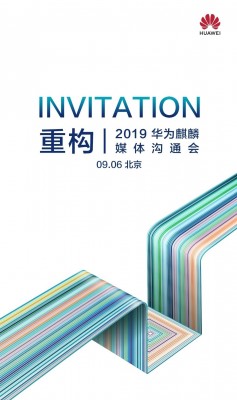 The Kirin 990 is expected to have an integrated 5G modem, meaning it doesn’t rely on an external chip like the Snapdragon 855+ does. Even if this rumor doesn’t pan out, we expect 5G will be a key part of Huawei’s keynote as well.

All of this lays the groundwork for the unveiling of the Huawei Mate 30 flagships, scheduled for September 19 (the event will be held in another Germany city, Munich). Huawei will use its time in Europe to try to sway the EU and local carriers to include it into the 5G rollout.


The Kirin 990 will be built on a 7nm process and may become the first chipset to use Cortex-A77 cores for a 20% boost in performance. Unconfirmed info claims the new GPU will be be 50% more power efficient and that 990 will become the first Kirin chipset capable of 4K/60 video capture.

Funny how biased someone can be. Just google snapdragon 845 antutu.

Which you watching on a 6 inch screen. So still anything beyound FHD recording is pointless.

I hope you don't really expect that anyone will believe your absurd lies XD The Kirin 970 already did beat the SD 845, as you can see here: https://www.bintooshoots.com/huawei-hisilicon-kirin-970-beats-qualcomm-snapdragon-845-in-benchmarks/ ...