Intel has taken the wraps off the 7th generation of Core processors. Called internally as 'Kaby Lake', the new processors are based on Intel's 14nm (or 14nm+) architecture and are a refined version of last year's 'Skylake' series.

The buzzword this year for Intel is 4K, with the company having geared the processors for 4K media consumption and creation. If you're a desktop user and are wondering what's the big deal about 4K encode/decoding then it's worth noting that these new chipsets are primarily aimed at notebook and all-in-one computers, that often come without dedicated GPU and can get all the help they can need for high resolution media processing. 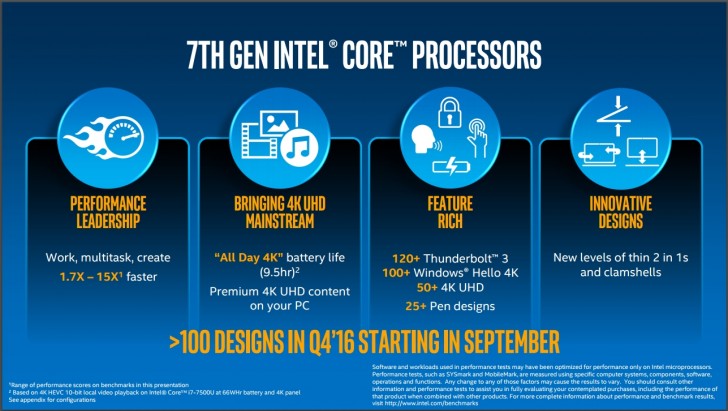 With today's announcement, Intel has announced the first six processors from the new series. Three of the parts (Kaby Lake-Y) have a 4.5W TDP and are meant primarily for tablets and 2-in-1 devices with dual core CPU and HD 615 GPU, and the remaining three (Kaby Lake-U) parts have a TDP of 15W and are meant for notebooks with dual core CPUs and HD 620 GPU. The Y series parts include an i7, i5, and m3 processor each, and the U series parts include an i7, i5, and i3.

We will be seeing manufactures coming out with new products based on these new processors, possibly even Apple, in the coming months.

aah i see the problem..my original comment was a reply..i was commenting on a i5 5200 or something...not 2nd gen..i said i was typing on my 2nd gen..its now useful for that only..sadly..keeping it because my new laptops don't have dvd drives and i do...

you are right in normal activities but when software require more bandwidth you can get 50% or more improvement by using faster ddr4 ram check eurogamer review of i3 6100 http://www.eurogamer.net/articles/digitalfoundry-2015-intel-core-i3-6100...