iOS 4.3 is ready for next week launch, iPhone 5 might have NFC

According to people close to Apple, the iOS 4.3 has reached Gold status and should become available rather soon. Meanwhile an Apple patent sketch reveals unknown iPhone with an eWallet icon that can mean only one thing - Apple is or have been considering a NFC-enabled iPhone.

Apple is holding a press conference next week to unveil the new iPad 2. We guess it is also the perfect opportunity to launch the iOS 4.3 update. Perhaps it will fill the functionality gap between the GSM and the CDMA versions of the iPhone 4.

In other news, a picture from a new Apple patent reveals an iPhone with an NFC icon. Perhaps Apple will equip the next iPhone with NFC support, following a recent trend among high-end mobiles. 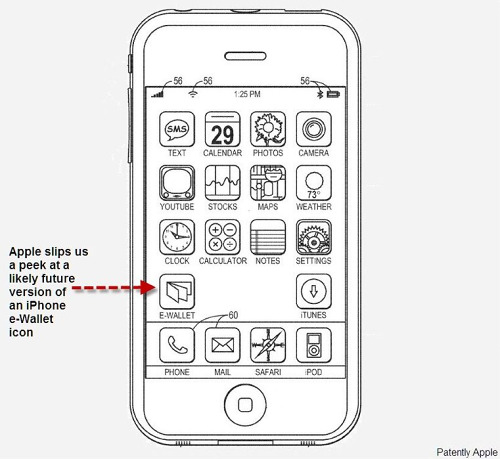 We guess will find about the iOS 4.3 on 2 March, while whether the iPhone 5 will support Near Field Communication will become clear in June.

ummm, did u ever notice that the Samsung Galaxy S kinda looks like the iPhones...? maybe Samsung should come up with their own original designs....

This new iPhone 5 looks like a Samasung Galaxy S II copy. Can't apple come up with somthing original rather than a touch screen with big icons. If this thing can make calls without a deathgrip causing the signal to cut out I think Samsung should file...