Latest iPhone 7 video shows the phone from all sides

An extended version of the iPhone 7 video that came out a few days ago is now available for your viewing pleasure. The video shows a comparison in the hardware design between the iPhone 7 and iPhone 6s. Additionally, a number of photos are also available to illustrate the differences a step further.

As you probably know by now, the main differences between the iPhone 7 and current generation are the lack of a 3.5mm headphone jack, redesigned antenna lines and a seemingly larger camera bump at the back. 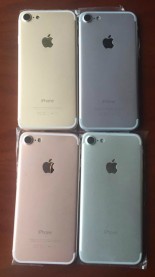 There's plenty of time until September when Apple is expected to announce the iPhone 7, so we'll be in for a lot more leaks in the meantime.

This one is just a phone model. I think if this will be the real iphone 7...They simply want to urge the sale of iphone 6s.

ahh...all the denials from the fans that apple won't design something this ugly is amusing...haha...