Mozilla's Firefox OS has made its debut in Japan today, with the announcement of the Fx0. This oddly named smartphone manufactured by LG is designed by Tokujin Yoshioka, and it's transparent. Literally.

As you can see from the image below, the Fx0 lets you peek at its internals without ever needing to take off a cover or something like that. And it's also got a home button decorated with a golden version of the Firefox logo. 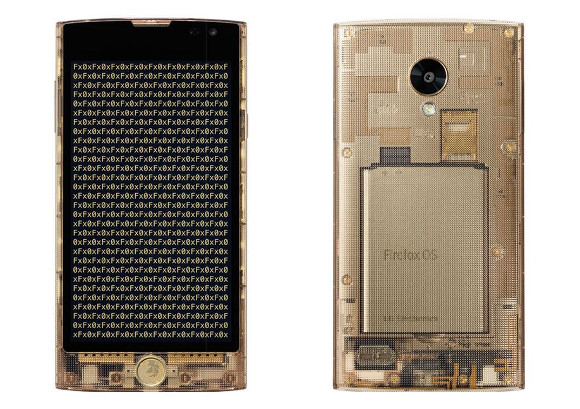 The Fx0 is certainly different from all previous Firefox OS phones, which have so far centered on being as cheap as possible. This one, though, is more of a design statement. That's why it will also be the most expensive Firefox OS device we've seen so far, being priced at JPY 50,000 (that's $414 or €340, by the way).

Aside from being transparent and all that, the Fx0 takes its design cues (the shape, mostly) from the LG G3, but it is smaller. It has a 4.7-inch IPS touchscreen, while its resolution hasn't been made public yet.

In a first for a Firefox OS handset, the Fx0 will have support for both 4G LTE and NFC. It will be offered exclusively by KDDI and only in gold. A limited sale will start on December 25, and the phone will be widely available in Japan starting on January 6. Just don't hold your breath if you're hoping to see it sold elsewhere - smartphones from Japan rarely make it to other places.

well i got a new one.android one but i live in iran so ...