The Media Player app does what it says on the tin – and for the most part does it well.

The default view shows you the list of videos on the memory card. The player interface is simple and easy to use – it offers the playback controls and automatically switches to full screen when you tilt the phone.

A pleasant surprise is the built-in support for DivX and XviD videos. Unfortunately, playback is limited to a maximum video resolution of 400 by 240 pixels.

It’s better than usual – built-in DivX/XviD support is rare on most OSes and Android is no exception. But you’ll have to re-encode videos if you want to watch them on the LG GW620.

For some reason the app kept crashing when there were .WMV files in the folder.

The Media Player plays music too

DivX wasn’t the only surprise that the Media Player had in store. It’s a music player too! But we almost missed that – to get to the music player you have to press the menu key and choose Music. Pressing the Back button brings you right back to the list of videos.

Music in the Media Player app is skinned to resemble other LG music players, but aside from a sleeker look and a few animated transitions, it doesn’t really bring anything new to the table.

There’s no equalizers, no visualizations – nothing the vanilla player doesn’t have and nothing to really enthuse the audiophiles out there.

Not including additional functionality is one thing, but why didn’t LG set this up as the default music player? It gives the impression LG did a half-baked job at skinning Android. Remember the two different styles of menu icons? It’s a minor thing, but a noticeable one).

Music player is still the same though

Selecting Music on the main menu (or pressing the dedicated Music key on the side) launches the default Android music player. Again, it’s an odd choice considering they’ve taken the time to add a skinned Media player. Anyway, the functionality (the lack of it mostly) is the same.

The core functionality is all there and the looks are mostly fine but there is still some catching up to do before the best in class are matched.

You can sort tracks by artist or album or you can browse them by playlists. The now playing user interface - though very sleek and more comfortable - doesn't offer too many new features.

While a song is playing, the track info is visible in the notification area and it’s a handy shortcut to the music player.

Unfortunately the well known gaps are still there, like no equalizer presets and no alternative visualizations when album art isn’t available.

The best part is the built-in search functionality that allows you to search a specific song title in Google or YouTube.

The LG GW620 is equipped with an FM radio in addition to the music player. Its interface is simple – there’s a tuning dial and you can save as many as 48 stations as favorites.

One thing that we didn’t like about the radio app is that it can’t play on the loudspeaker.

Despite being on the quiet side as fat as headphones volume is concerned the LG GW620 has pretty decent audio output.

The cut-off extreme bass frequencies are probably our only (not quite significant) grudge against it with the rest of the readings being very good (distortion levels) to excellent (stereo crosstalk, noise levels and dynamic range). 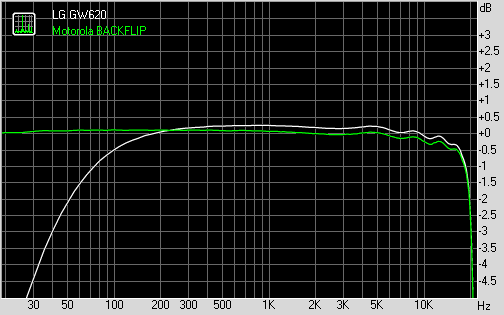