The original LG Chocolate was a huge success for LG thanks to the touch sensitive navigation pad that warmed consumer's heart with its touch of glowing red. Obviously set on continuing the "touching" tradition after two successful touchscreen models, LG will offer their next high-end handset - the LG KF600. 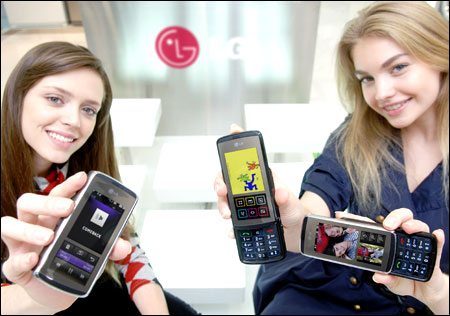 We've had a chance to play around with a prototype of the KF600 last year and we were more than happy with its performance. In fact the LG KF600 is the GSM counterpart of the US CDMA-enabled LG Venus VX8800, but with a beefier camera module.

We have also added a hands-on with LG KF600 during the WMC 2008 in Barcelona.

The unique about the LG KF600 does not lie in its form factor, design or size. It is a normal slider with decent dimensions. Its true beauty is in the seamless dual display setup on the front panel.

The display in the lower part of the front panel is a smaller, touch-sensitive one and is used for navigation (think Samsung E950 but much, much sleeker and in full blown color). This so-called InteractPad changes in accordance to the context and provides the user with a pretty adequate navigation solution.

Using the both displays seamlessly integrated

Unlike the navigational touchpad used on Samsung E950, which is more of an annoyance than a hip feature, the InteractPad of the LG KF600 seamlessly integrates with the main user interface in every aspect possible.

The user interface of the LG KF600 offers several distinguishable graphic themes made by the graffiti artists Keith Haring that can totally change the look and feel of the device.

The LG KF600 will be initially offered only on emerging markets in China, Mexico, Brazil and Turkey obviously in order to gain some points on markets that have not been fully explored. Then a month later the LG KF600 will become available to the rest of the world. Pricing is yet unknown, but a hefty price tag is expected.

My Phone is display cable problem

LG KF600? my interact pad is dead so i only reciv calls or dial the numbers that i remember. any help pls....