Today LG announced that their Optimus 3D Android smartphone will come with an exclusive augmented reality browser. The Korean company has collaborated with Wikitude to create an app that allows reportedly unprecedented interaction and engagement with your current environment. Yeah, right!

You see, while regular augmented reality apps like Layar running on regular smartphones only display overlapped objects, the stereoscopic screen of the LG Optimus 3D will actually show places of interest, landmarks and objects in 3D adding some depth to the whole experience. If you think about it, this is probably one of the coolest applications of that screen. But we bet, much like with other augmented reality apps, its coolness factor won't last more than five minutes. 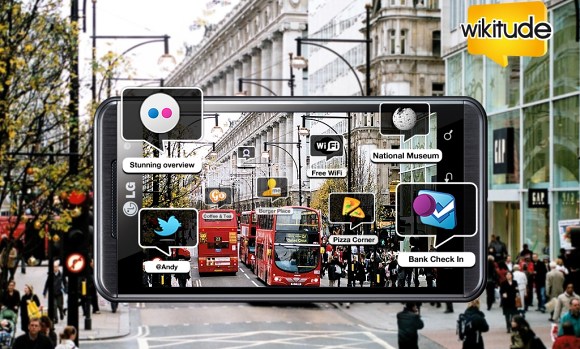 The information database of Wikitude 3D (that’s the name of the new app, Wikitude 2D has been around for some time) covers over 100 million locations around the world. The new 3D reality browser will supports 12 languages and more should be added in the near future.

As far as augmented reality apps go, you can't beat a 3D screen, that's for sure. Users will be able to download Wikiture 3D from the LG World appstore in June. The good news is that it’s going to be free. Useful? Well, we doubt it.

Yes, you definitely think in, by your admission, "different layers" if you expect that stereoscopic display from the (poor) stereo digicam integrated into a phone... would somehow enhance the ability of augmented tools to show coffee shops ...

Ok. Now I really think we are thinking in different layers. First, I am no expert in these. Second, augmented reality is all about discovering MORE than you see, like there is a coffee shop round the corner or some cool concert going on the next stre...

Writing about stereoscopy is very much "sticking with the article", whatever you'd like to think (what, just because for a change I point out _problems_ with the workability, numerous historical examples of them? Because I'm not among the n...