LG's trio of second generation Optimus L-series smartphones has made an appearance before their official announcement. The LG Optimus L3 II, L5 II, and L7 II have received expected hardware upgrades over their predecessors, while keeping the same design language which lead to over 10 million units sold. 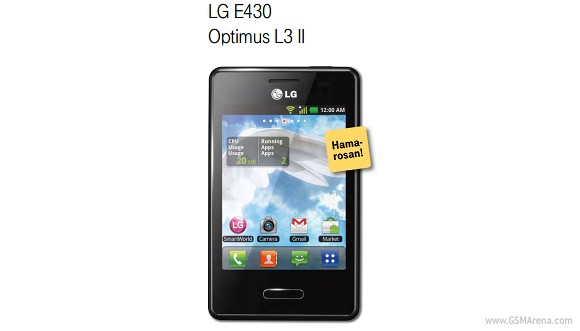 The entry-level LG Optimus L3 II from the image above will feature a beefier 1GHz CPU and improved IPS display panel, compared to what its predecessor had to offer, while keeping the same size and resolution. The camera will be a 5MP unit - up from 3.2MP for the older model.

The LG Optimus L5 II on the other hand, will pack a 1GHz Cortex-A9 CPU and PowerVR SGX531 GPU - a serious update over the 800MHz Cortex-A5 silicon of the first generation. The display is tipped to be a 4" WVGA unit, while the OS on tap will be Android 4.1.2 Jelly Bean.

Finally, we have the LG Optimus L7 II, which is scheduled to add an extra CPU core compared to the original. Reports point at a Qualcomm Snapdragon MSM8225 1GHz dual-core unit, Adreno 203 GPU, and 768MB of RAM. A 4.3" WVGA display, 8MP camera, 2,460mAh battery, and Android 4.1.2 Jelly Bean are also expected at launch.

Dual-SIM versions of the LG Optimus L5 II and L7 II are also expected, given the L-series' popularity in developing markets.

We are all but certain that the new LG Optimus L-series trio will break cover during MWC in Barcelona later this month. We will be out there in full force, so we will tell you all about the new devices.