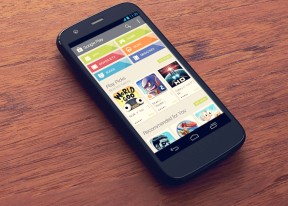 The Gallery app shows all of the photos on your phone sorted by albums. There is a pop up menu, which allows sorting you images by time, by album or just limit your image access to camera roll.

There are lots of sharing options, plus a capable integrated image editor.

The Photos app is the latest gallery app Google is trying to push lately. It integrates with Google+ and can backup your images automatically to your Google+ account if you like. It also shows all the photos from your online albums.

If you sign in with your Google+ account and allow your photos to be backed up in the Google cloud, you can also use the Auto Awesome feature - it auto enhances your photos and combines similar photos and videos as events in a cool way - it either exports a collage picture or a motion gif.

Video player integrated within the Gallery

The video player has retained its stock Android interface. Motorola however, have added much better codec support than the one found in Nexus devices. The video player is now perfectly usable out of the box - it plays DivX, Xvid, MP4 and MKV files up to 1080p resolution.

The multi-channel AC3 audio tracks are not supported though, which makes the MKV compatibility pretty much obsolete. WMV and MOV files aren't supported either.

Streaming videos to a Wi-Fi enabled TV is available. One way to go about this is to share your multimedia content over good ol' DLNA technology OR you can mirror your device's screen to the TV via the Miracast protocol (by casting your screen as it's called in the options menu of the latest Android KitKat).

Google's own music player called Play Music handles your music collection. It features the spanking New Listen Now feature, which tries to determine what you like and the sequence of your track-changing so that it can start offering you music you might like to play next.

The FM Radio is a pretty straightforward affair. Once you plug in a pair of headphones (to act as an antenna), the app will scan the stations available in your region. You can also input the region manually if the app doesn't configure it correctly.

There is RDS support, too.

The Motorola Moto G 4G performance in our audio quality test was more or less on par with its non-4G predecessor. The LTE-enabled handset did show slightly higher distortion, but the rest of the readings were pretty evenly matched.

When connected to an active external amplifier the Motorola Moto 4G showed great dynamic range, signal-to-noise ratio and stereo crosstalk. Its frequency response could be better in the lowest and highest frequencies but it was close to perfect for the rest of the range. There were no traces of distortion, either.

The good news is, besides the extra stereo crosstalk, there's virtually no degradation when you plug in a pair of headphones. And with the volume levels pretty high in both tests, the Moto G 4G earned an excellent mark here. 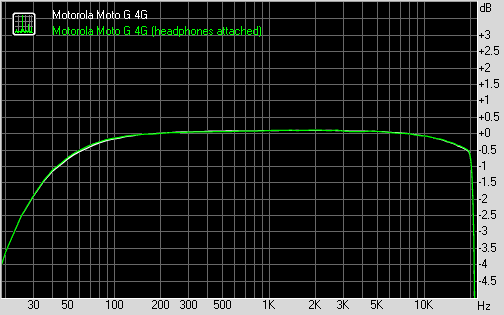