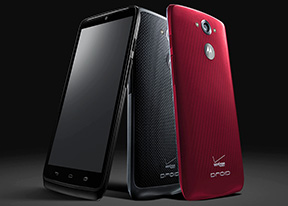 The Motorola Droid Turbo is a beefed up Moto X (2014) dressed in a military apparel. It's tough and built to last with the company offering two flavors of the phone - one with Ballistic nylon and the other with Metallized glass fiber. The latter is reinforced with Kevlar, akin to previous generation Droids. Sounds highly engineered though we're yet to see the ruggedness of the phone in action.

The phone boasts an impressively 5.2" AMOLED display with QHD resolution. The math works out to 565ppi, bested only by regionally-limited Galaxy S5 versions with 5.1" QHD screens. Anyway, the display is covered with a protective coating of Gorilla Glass 3 to ward off scratches. The Droid Turbo isn't afraid of water either as its innards are covered with water-repellent nanocoating and it can last up to 1 minute under 6 inches of water.

The Motorola Droid Turbo in person

Visually, the two versions of the phone look cool, we especially dig the Kevlar back. The red color option looks great in person, very aggressive.

The Motorola Droid Turbo feels great in hand thanks to its curved design. The two material options differ slightly in dimensions and weight. At its thinnest point, the Black nylon version measures 8.3mm, while the Metalized fiber is a bit thinner at 7.8mm. They weigh 176g and 169g respectively. With its above average weight the phone feels substantial in hand, the build is solid and gives the impression it will last a long time.

Taking a tour around the phone

That last claim is for more than just the physical durability, Motorola promises the Droid Turbo will last up to 48 hours of mixed usage thanks to the large 3,900mAh battery. In the package, the company includes a Turbo Charger which will give you up to 8 hours of usage only after 15 minutes of charging.

The Droid Turbo climbs towards the top of the performance ladder thanks to the Snapdragon 805 chipset with a 2.7GHz quad-core Krait 450 CPU and 3GB of RAM. The QHD screen resolution won't be a problem for the Adreno 420 to push around (the GPU is clocked at 600MHz). Android 4.4.4 KitKat absolutely flies, everything is smooth and responsive, check out our benchmarks on the next page. We feel that the Droid Turbo could have packed Android 5.0 Lollipop, all we have right now is Moto's promise to upgrade.

A peek at the circuit board

As for the rest of the software, Motorola likes to keep things as close to stock as possible while sprinkling some nice features here and there. The Droid Turbo benefits from this recipe with features like Moto's Display app, which wakes the screen when you reach for the phone and shows you the time and pending notifications. Verizon has left its mark too with the Droid Zap app for easy picture and video sharing. You can also use it to cast to a TV using Google Chromecast.

In terms of connectivity, the phone offers 4G LTE Cat 4 (downloads up to 150Mbps), Wi-Fi 802.11ac, Bluetooth 4.0 and NFC. It comes with quad-band GSM and quad-band HSPA+ support for roaming outside Verizon's CDMA network.

The 21MP camera offers 4K video recording at 24fps, you can see a bunch of camera samples we took with the Droid Turbo on the next page.