The design of the Motorola Edge is one of the phone's highlights, and the reason is obvious. The arched screen is quite the treat, especially with that high-contrast OLED panel with 90Hz refresh rate. 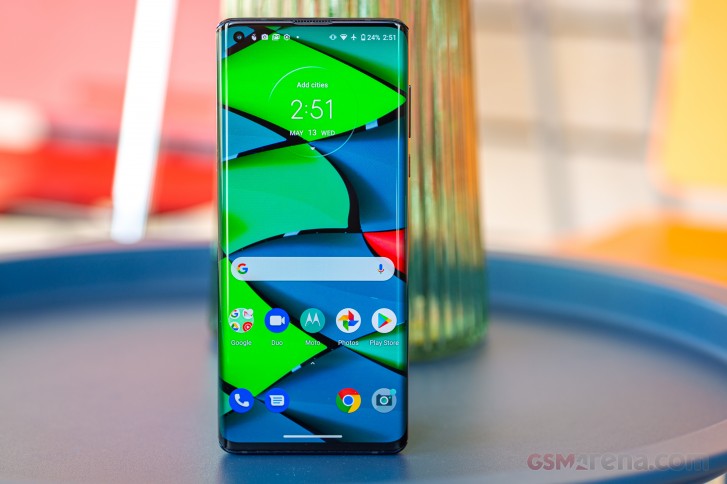 Indeed, just look at the steep slopes on the longer sides of the screen - they go halfway around the sides until the thin aluminum frame stops this. And it is beautiful, futuristic even, although we've already seen such waterfall-like OLEDs on enough flagship devices. 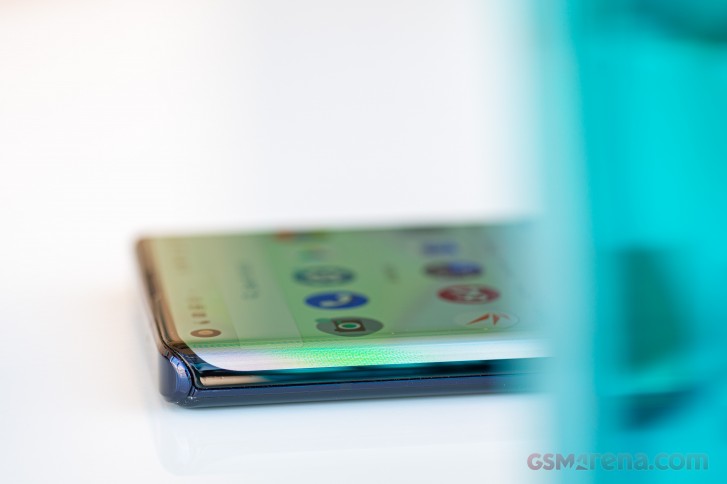 We are not sure if these will be everybody's cup of tea, especially with the shadowy effect around these edges, but maybe the edgy-ness will be the turning point for making the Edge a best-seller.

Anyway, the Edge's display is edge-to-edge, while the top and bottom bezels are rather negligible by today's standards. There is a punch-hole cutout for the 25MP selfie camera, but it is small and most of the time does not get in the way of anything. 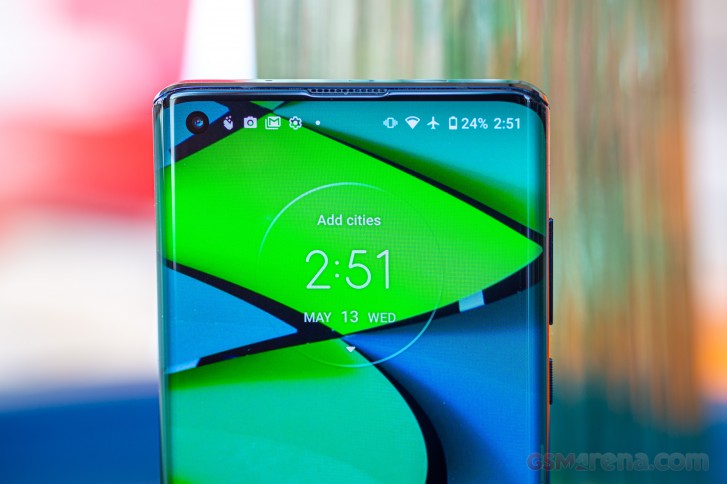 The screen is protected by properly curved Gorilla Glass 5 by Corning, and it feels indeed sturdy despite the shape.

The earpiece, which also doubles as a speaker, hides behind one very thin grille above the screen.

Meanwhile, under the OLED, invisible to the naked eye, is an optical fingerprint scanner. It works pretty fast and is very accurate, so we have no complaints whatsoever. The back of the Motorola Edge is almost as curvy as the front, though it is not made of glass. But if we didn't spoil that for you, it would have been really hard to tell it is plastic.

And it is one nicely crafted piece of plastic, Dark Blue as ours or else, looking like the black and the blue colors melted together, with a pinch of stardust. 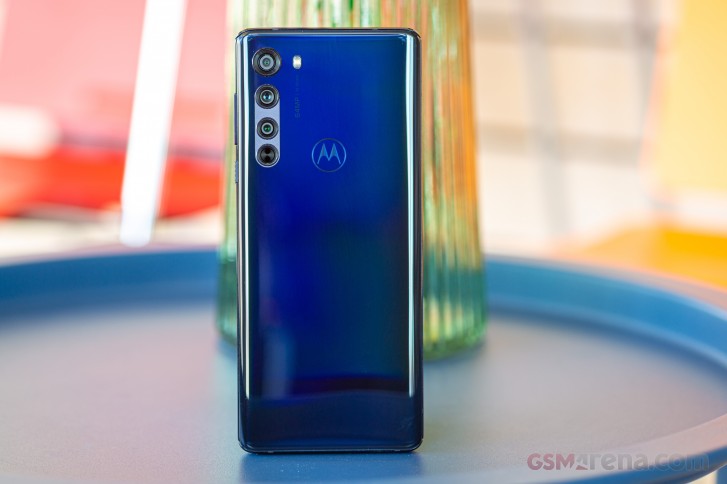 One other cool thing about the Edge's rear panel - the four cameras are flush with the back. Well, almost. There is no protruding piece of glass per se, but there are four teeny tiny metal rings surrounding those snappers. And while they theoretical do stick out, it's not enough to make the phone wobble. And that's why they as well be blush with the plastic. 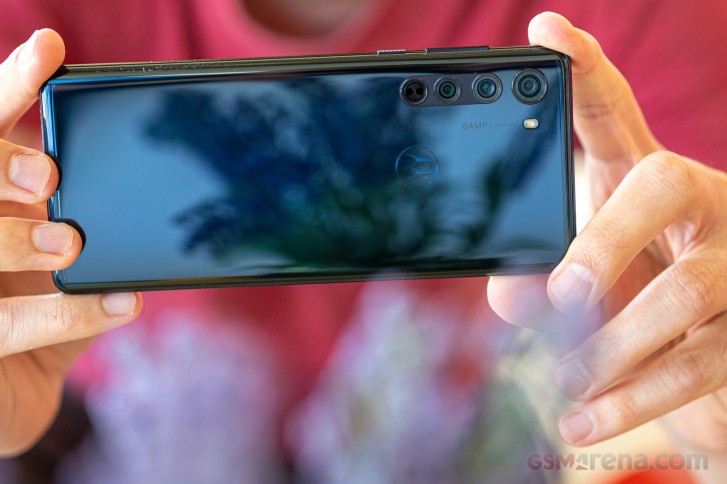 Before we look around the aluminum frame, here is something interesting. The Motorola Edge can be left standing up on its bottom side and it will be perfectly still. The frame is flat around the top and bottom, while the Edge has its internals with a good weight balance, and so you can do that. It doesn't matter much, but it's extremely rare these days for a phone to be capable of that, so we wanted to give the Edge our virtual thumbs up.

Now, about that frame. It is painted in the same dark blue hue as the rear panel and as we said - it is mostly flat around the top and bottom. 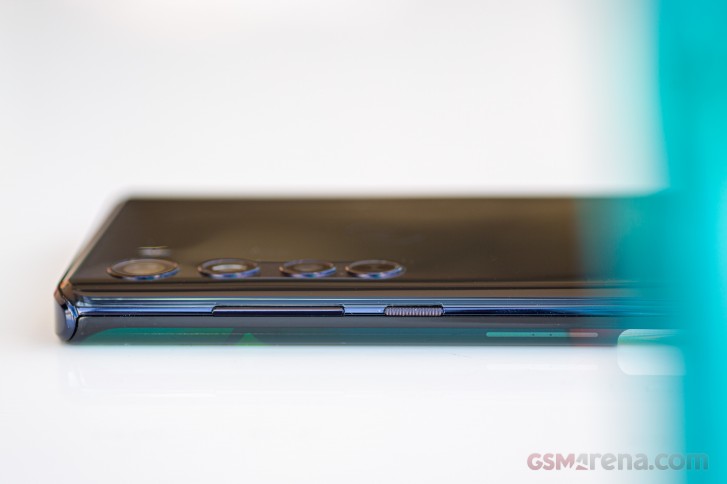 Around the longer sides it is so thin, thinner than a credit card, and there is a good chance you may think there is no frame at all. Well, there is, helpfully sharp at that, and it is the only thing to make for some grip when taking pictures. 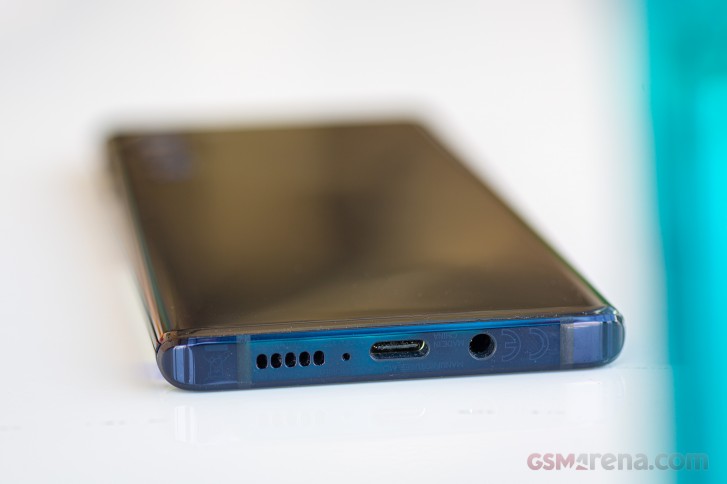 On the bottom of the Motorola Edge is the second speaker, the USB-C port, and my, oh, my, a 3.5mm jack! Look at that! We are sure the audiophiles will appreciate this feature. 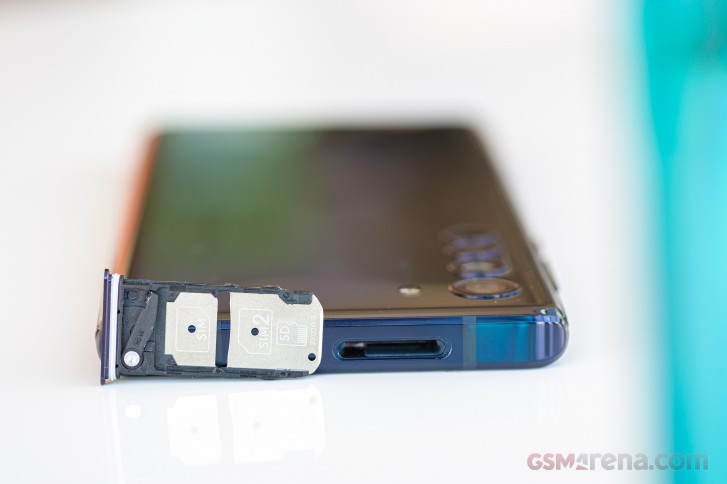 The SIM tray is at the top of the Edge, and it has a dedicated microSD slot - something that is entirely absent on the Edge+.

The Motorola Edge measures 161.6 x 71.1 x 9.3 mm - about right for a 6.7-incher, even if a bit thicker. Then again, it does come with a sizable battery so that we won't hold the thickness against the Edge. The phone weighs 188g, also in line with the size and battery. 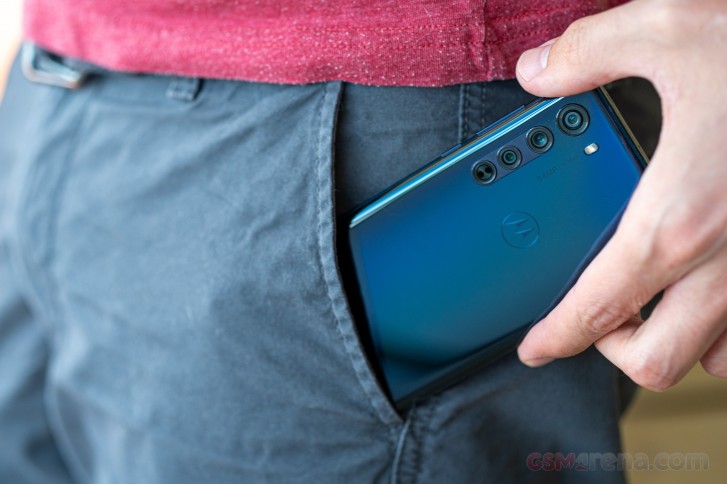 Handling the Motorola Edge is a nice experience, and the frame provides for enough grip not to use the provided case. Not that the case is bad, it just ruins the beauty and looks like we've put the Edge in a rubber boat. Anyway, the Motorola Edge can certainly pass for a flagship, even if it is aimed at the mid-range segment. It has the looks, the materials, and the screen, while the splash-resistance (IP52-certified) is appreciated as always.