Motorola introduced yet another Android smartphone for the Chinese market. Called Motorola XT760, the new droid is built around a 4" qHD screen and a 1GHz dual-core CPU of unknown architecture.

The mid-range Motorola XT760 comes with quad-band GSM/GPRS/EDGE support and dual-band 3G with HSPA. It runs on Android 2.3 Gingerbread and has a camera on either side of its chassis. The main snapper at the back can capture 8 MP stills and 1080p video, while the front-facing shooter is limited to VGA resolution. 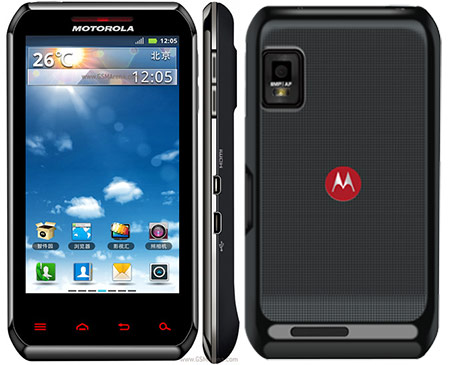 The Motorola XT760 comes with 768MB of RAM and 2GB of built-in storage with microSD card slot for expanding that by up to 32GB. Local connectivity is well covered with Wi-Fi a/b/g/n, Bluetooth 2.1, USB 2.0 HS, a 3.5mm audio jack and an HDMI port.

Motorola XT760 is available from authorized Motorola resellers across China starting today, but its pricing hasn't been confirmed by the official Motorola press release. There's also nothing on the potential release of the smartphone in other markets.

i would never suggest anyone buying motorola phones specially xt series i bought 2 phones from them the last one was xt720 .there phones are good for only one year after that its just garbage motorla customer service sucks too bye nokia or something ...

The hardware is good, but the appearance is so ugly

Not all phones are meant to be top end phones. Funny how people like you have a very hard time understanding that.