The Samsung Galaxy S21 Ultra will steal some of Note’s thunder as it too will support the S Pen. However, this will be more of an add-on than a native feature. The S21 Ultra retail package will not include a stylus and the phone has nowhere to house the stylus in the first place.

Instead, the S Pen will be a separate purchase – either by itself or as part of a bundle with select cases. Those cases are a vital part of the equation as they will house the stylus alongside the phone. 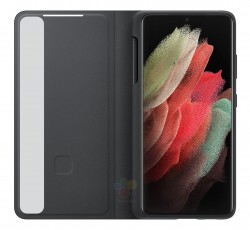 You can see that in these renders of the new S View Flip Cover, which were dug up by WinFuture. The case will be slightly wider than usual to accommodate the thickness of the stylus. Also, the case will hold the stylus is just the right position so that the phone can charge it.

That’s right, the S Pen will retain its remote functionality. While the basic stylus functions do not require a battery, recent models added Bluetooth connectivity to allow it to function as a remote shutter key and even added an accelerometer and gyroscope to detect gestures. And that means you have to keep the stylus charged (which wasn't an issue for Note phones).

The S Pen in question appears similar to the model used by the Galaxy Tab S7/S7+. The two tablets also lack a sheath for the stylus (they use magnetic attachment instead). Compared to the Galaxy Note S Pen, the stylus lacks the clicky bit at the top.

The S Pen will cost €40 by itself, the same price as the Note20 model. Samsung will also sell it in a bundle with the Flip Cover and select silicone case as well. The ones we’ve seen have no way to store the stylus, however, so there may be S Pen variations of some cases. The Unpacked event for the S21 series is expected to take place on January 14.

No it didn't. Yes, there are rumors that it will get cancelled but as of now nothing happened and it likely won't. Maybe stop reading gossip tech sites.

What price for this cover?