The OnePlus 5T has started receiving a new update. Arriving as OxygenOS 4.7.4, the update weighs in at 285MB and brings along a couple of camera-related changes as well as some system-related optimizations and improvements.

To begin with, the photo quality has been improved. Also, the UI of the camera has been optimized. 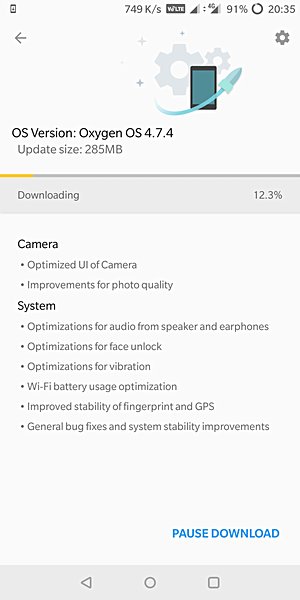 System changes include optimizations related to audio, vibration, face unlock, and WiFi battery usage. Then there are improvements related to fingerprint and GPS. Finally, some usual bug fixes and stability improvements are included as well.

Can you please send me the link for the working Google camera for OnePlus? Thank you.

you need to grow up KID if you talk like some other WELL PAID Peoples OnePlus cheap ? really ? then Tell me 1 thing MI MIX 2 have much better choice than this SHIT OnePlus and if you shout like Camera dual then go and check Review by C4E Tech be...

My phone is working fine. Trolling?