New Nokia EOS photo sizes it up against the Lumia 920

We already got familiar with the upcoming Nokia EOS cameraphone and concluded it looked pretty similar to the Nokia Lumia 920.

However, Vizileaks, one of the main sources of the Nokia EOS leaks has taken yet another photo of the Windows Phone 8-running cameraphone to show the world just how visually similar the new Nokia flagship is to its predecessor. 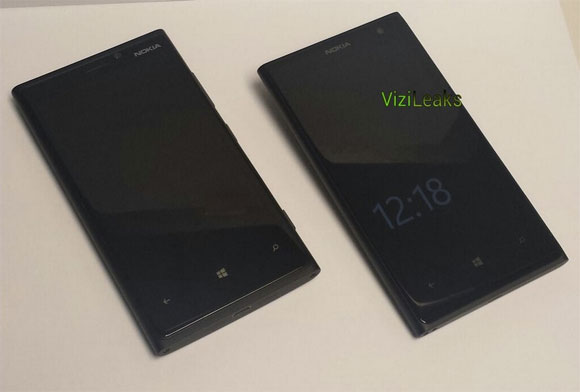 Not many differences can be spotted at first sight, but looking closer reveals that Nokia has changed the position of the logo and the front-facing camera on the EOS. The screen of the Nokia EOS also extends just a bit more, than the Lumia 920, leaving a very thin plastic frame below it.

Naturally, the Nokia EOS stands at an angle as its camera hump protrudes quite a lot. We are eager to compare it to the recently announced Samsung Galaxy S4 Zoom, but Nokia hasn't mentioned anything yet about a potential official announcement of the EOS.

Are u an archaeologist?

Too long? to my knowledge Galaxy S5 won't come until next year. This EOS is going on THIS YEAR!