Symbian Anna offers exactly the same gallery as the Symbian^3 and its predecessors, which only qualifies as passable by modern standards. The only new addition is the kinetic scrolling (finally!)

The sweep gestures and getting pinch-zooming are here, but still there is nothing eye-candy inside.

Unlike its Symbian^3 predecessors, the E6 finally introduces the kinetic scrolling but not kinetic panning. We are just tired of asking for those simple gestures.

The familiar pinch gesture works for zooming in/out, as the double taping or even the on-screen slider. You can't zoom with the volume rocker though.

Selection of multiple photos for deleting or sharing is available straight from the gallery. There are plenty of sharing options – you can send the image via MMS, email or Bluetooth or you can share it on Facebook, Twitter and other social networks. To do the latter you should configure your social accounts first.

The final features of the image gallery include the image tagging system for easier image sorting, the slide show and the albums system (again helping you sort your image database).

Overall, picture browsing is relatively fast even with 12 MP pics, even when you are zooming.

Nokia E6 has two very useful apps - the image and video editors. Both have very simple interfaces but offer a powerful set of functionality.

With the Image Editor you can crop, rotate, resize, apply text/effects/pictures/stamps, clean red-eye effects, etc. Everything is touch-optimized and unless you have really big fingers, you won’t have problems here.

The Video Editor has two modes - make/edit videos (from your pictures and videos) or create slideshows from your photos. Once again the controls are touch-optimized and really simple to use.

Symbian Anna running on the Nokia E6 has the same music player as Symbian^3 has - the one with the new Cover Flow-like interface.

There’s automatic sorting by artist, album, genre and the option to create custom playlists straight on the phone. The music player supports a huge number of formats and it has an equalizer plus a stereo widening feature.

There are five equalizer presets, including Bass booster, but you can’t create your own.

Equalizer and stereo widening are available

Impressive video player with subtitle support (via a small update)

The E6’s video player is even better than the one on the N8 or the E7. It comes with DivX and XviD support out of the box and is quite capable.

The playback was silky smooth on all files with a resolution up to and including 720p, which is quite impressive.

The media player app itself only works in fullscreen landscape mode (not that we need anything beyond that). When in fullscreen, a press on the screen shows the controls, which are normally hidden. The screen is quite small so we recommend using the zoom to fit option so you can enjoy what you are watching the most.

Watching a video on the E6

The E6 handled everything we threw on it - all the AVI, MP4, MKV and even WMV files played like a charm. It also comes with subtitle support (there is an update waiting for this right after you turn on the handset), but don’t expect lots of supported languages. The handset is also capable of playing files bigger than 2GB unlike its predecessors.

Some restrictions do apply, though. The E6 can't play MOV files and can't handle the audio AC3 codec. If some of your files are encoded with AC3 (the MKV ones for example), you won’t hear any sound while playing them.

We didn't experience any lag while testing with our samples both in playing or fast-forwarding.

Just like most of its family members we have tested recently, the Nokia E6 did great in our audio quality test. Pretty loud and clear, it really deserves a pat on the back.

When attached to an active external amplifier (i.e. your car stereo or your home audio system) the Nokia E6 does marvelously with no weak points whatsoever.

There wasn't much quality deterioration when we plugged in headphones either (it's even less than on the multimedia flagships of the company, the X7 and the N8). Sure, the stereo crosstalk got a bit worse and we recorded some increase in intermodulation distortion but both of those readings are still quite a lot better than average. 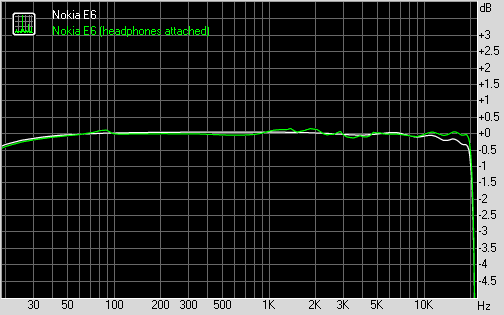