Microsoft is doing well to shake things up in the Lumia lineup. A couple of devices shown at IFA in September have hit the shelves and, the software boost courtesy of Lumia Denim aside, the lineup is being updated in the right place. The upgrades are even slightly overdue perhaps - busy adding a tablet and a couple of phablets to the lineup, along with dual-SIM support and cheap screen real estate, Nokia and Microsoft somehow overlooked the midrange.

The Lumia 720 went nearly two years without an upgrade and it was by no means a phone that deserves such treatment. OK, this maybe just our opinion but we liked the 720 and the Lumia 735 we've just finished reviewing is showing due respect as well.

LTE and HD screen resolution look nice on the list of upgrades but the good news don't end there. It's an AMOLED screen now with the ClearBlack technology for great contrast and outdoor legibility. The 5MP wide-angle front cam is perfect for selfies and the 1080p videos are welcome as well.

The phone handles great and still looks good, although honestly it's not going to wow onlookers. Well familiar and deliberately understated, it's a design we've seen minor variations of on many Lumia handsets. Fair enough. This is one of the last Lumia phones to carry a Nokia brand and Redmond may be saving the fresh hardware for the ones that have the Microsoft logo. Just a thought. 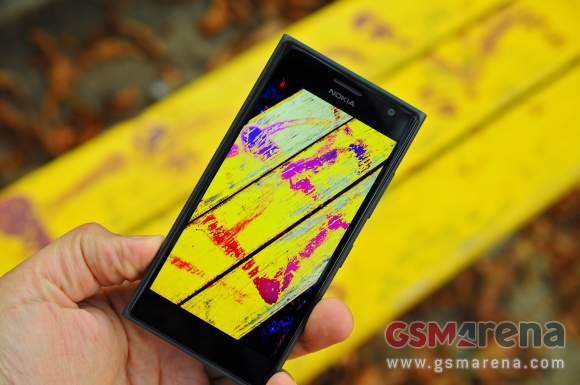 Anyway, the polycarbonate shell is pleasant to the touch and gives the phone a solid, near premium feel. It's not a unibody but the customizability and, especially, a user-replaceable battery are always a point in favor.

We were quite impressed by the phone's 4.7" 720p ClearBlack AMOLED display. It's not only got vibrant colors and excellent contrast, but great viewing angles too. The resolution is spot on for a midrange device and the size hits the right balance between manageability and screen real estate.

The AMOLED display will work in your favor when it comes to battery life too. The 2,220mAh battery will last you a good couple of days on a single charge and that's something few of the Lumia 735's competitors can match. Wireless charging is a nice little bonus.

Power efficiency is helped by the Snapdragon 400 chipset too, which is par for the course in this price bracket. With LTE and 1080p videos on the spec sheet, the S400 just cannot be held against the Lumia 735. The phone never felt sluggish.

Lumia Denim adds a few bells and whistles to the camera department, including the Lumia Selfie app to complement the high-res wide-angle front-facer. The main 6.7MP rear camera of the Lumia 735 shoots very decent photos and the stills won't disappoint either. The excellent 5MP front cam is optimized for Skype video chat too.

Now, the competition. It's by no means a coincidence that we start with a phone that launched at about the same time as the Lumia 735's predecessor, the Lumia 720. That's some 18 months ago but the Sony Xperia SP is undoubtedly a near perfect match with a 4.6" 720p screen.

By the way, the Sony Xperia SP was an extra-solid upper midranger that we liked immensely but instead of seeing more of its kind, the market got somehow skewed towards big but low-res screens and dual-SIM support. Speaking of, the Lumia 730 is the exact same package as the 735, only swapping the LTE radio for an extra SIM slot.

There're some of the Android minis too, of course. The HTC One mini 2 has a 4.5" 720p screen and is powered by a Snapdragon 400. It even boasts a 5MP selfie cam as well. Another HD 4.5-incher, the Samsung Galaxy S5 mini has more processing power courtesy of Exynos with the same 4 Cortex-A7 cores clocked at 1.4GHz. The water-resistant Samsung has an AMOLED screen.

The Motorola Moto G 4G is spot-on too if you're weighing up your alternatives. The phone sells like hotcakes and for a good reason. Although prices vary across markets, you're likely to get the Moto at least a little cheaper than the Lumia 735. It has the same Snapdragon 400 chipset, LTE connectivity and microSD card support. It has a tad smaller screen at 4.5" of the same 720p resolution, which is a bit sharper, but the Lumia 735's AMOLED screen has the better contrast and outdoor legibility.

Of course, there're even cheaper, S400-powered droids, which will offer LTE if you're willing to sacrifice some screen resolution. The HTC Desire 510 looks quite alright and sports the newer Snapdragon 410 chipset. The Sony Xperia M2 has a solid 8MP camera but a cannot match the high-res selfies of the Lumia 735.

Anyway, now that we mentioned it yet again, the high-res front camera is by no means the Nokia Lumia 735's biggest asset. Microsoft calls it a "smartphone made for selfies" but there's more to it than that. An extra solid AMOLED screen of HD resolution, LTE, wireless charging, free global offline voice-guided navigation, Office apps, nice stills and videos, plus value-added imaging apps. A lot more actually. More than enough to not only retire a Lumia 720 but perhaps give rival droids a warning.