Nokia N8 goes on pre-order, arrives by the end of September

The first Symbian^3-powered device, Nokia N8, was first said to start selling in August but it seems that the phone has actually been pushed back a month. But the good news is if you happen to live in Italy and want to be among the first owners of the smartphone, you can pre-order it right away.

To refresh your memory, Nokia N8 isn't only the first Symbian^3-running smartphone but also the only (so far) Nokia device to come with a (pretty good) 12-megapixel snapper on board. On top of that it also features an anodized aluminum casing, a 3.5-inch capacitive touchscreen as well as a 680MHz processor, HDMI port and a video player with DivX/XviD support. 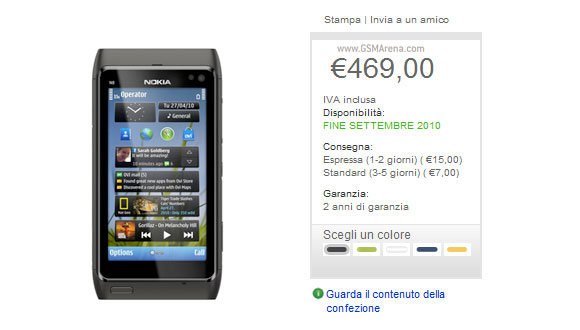 The N8 was said to start shipping on 24 August but, apparently, the device needs some extra touches and will arrive by the end of September 2010. If you want to pre-order it, just follow that link. It only takes a few clicks and 469 euro.

The price is a bit higher than the 370 euro Nokia talked about at the announcement event (it adds up to 444 euro when VAT is included). We do believe that this will be fixed a few weeks after the phone actually hits the shelves though.

you mean you didn't try the phone before you bought it? that pretty much makes your recommendations redundant. unless you try a phone before you buy it you can't really moan about it afterwards. you'll probably be the first to buy the N8 a...

It's taking too long. Hope the 'efizy' won't fizzle out b4 arrival.