The OnePlus 6 Avengers Infinity War Edition is the latest special edition device from OnePlus. Following the Star Wars Limited Edition from last year, OnePlus has once again teamed up with Disney on a popular franchise for their new release.

The good thing this time is that we know right at the outset that this edition exists, unlike the Star Wars edition which sneaked up on us a month after the standard 5T went on sale. The bad news is that it's not coming any time soon. But to make the wait more bearable here's a quick hands-on.

As with the Star Wars edition, the star of the show is the packaging. While the standard edition comes in a boring white box, the special edition gets a new black square box with the Avengers logo on it.

Open up the box and you'll see the phone up front - we'll be back to it in a second. The box opens up further to reveal the standard DASH charger and cable on the right and on the left is a card with the Avengers logo and a message from the OnePlus team on the back.

Underneath that is a case and a gold colored metal medal with OnePlus and Avengers logo on one side and the name and logo of one of the Avengers, which in our case was Thor. There are six of these in total, one for each main character, and together they complete the Avengers logo on the back. But unless you're expected to buy six of these phones (or more, since there's no way to know which one you are going to get), I don't see how anyone will complete the logo. 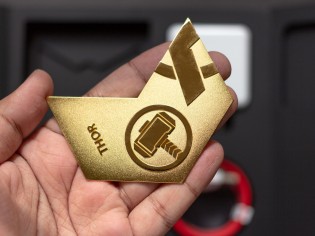 There are no hidden surprises this time. For those who don’t remember, the Star Wars edition had a hidden message inside the greetings card and solving that puzzle led to a secret compartment inside the box. That contained a clear plastic apparatus that had to be kept on the phone's display so when you searched for the weather of a certain planet in the Weather app, a hologram of sorts appeared. It was a pretty neat idea and added an extra special touch to the packaging. This time, there are no such Easter Eggs, which is a shame.

Now coming back to the case, this time we have an Iron Man design on the back. The case design is otherwise similar to the Kylo Ren case, with a thick and sturdy design that makes the phone feel indestructible inside.

It's a bit more ergonomic this time and doesn't bulge as much at the back so the phone rocks a bit less when kept on a table. The buttons are easy to use and exceptionally clicky even through all that rubber. It's only the alert slider that's a big hard to access and the headphone jack may not be usable with all types of plugs anymore. But apart from that it's a neat looking case and definitely makes the phone stand out.

Now, circling back to the phone itself, the Avengers edition has the same glossy glass back as the Mirror Black edition but underneath is a slick-looking carbon fiber pattern.

The pattern is a bit subtle and depending upon the lighting it might not even be particularly visible. It's also just a visual effect so it doesn't feel any different to touch than the Mirror Black edition. Also present are golden OnePlus and Avengers logos.

On the right side of the phone, the alert slider is now a bright shade of gold as well. Apart from that the phone is identical in terms of hardware to the other OnePlus 6 variants.

You also get an Avengers theme, which honestly is just a dark theme with yellow accents, which can very easily be replicated on a standard OnePlus 6; the Star Wars edition at least had a more unique red accent, which isn't normally available. Lastly, there is a clock widget with the Avengers typeface.

Last year, I was slightly underwhelmed by the Star Wars Limited Edition, but the truth is the Avengers edition really makes that one feel special in comparison. I like the case and the carbon fiber pattern on the phone is nice but the simple medal inside isn't all that interesting and the wallpapers are somewhat uninspiring this time around. I would still consider buying this for the case and the unique design but the Avengers fan in me can't help but feel disappointed.

What are we paying extra for ? A case??