Oppo's Singapore event is now under way and we were off to a great show - the star of the show took the stage just minutes after the start. The successor to the Oppo N1 is called Oppo N3 and retains the rotating camera module on the top, while adding a few nice extras on top. The Oppo N3 sports a 5.5" display, meaning it's much smaller than the 5.9" Oppo N1.

With 16MP on a 1/2.3" sensor and f/2.2 aperture, the Oppo N3 should be a potent cameraphone. The lens on the camera is also Schneider Kreuznach certified, while a nice touch to the rotating module is the added motor, which allows it to auto-rotate.

Each pixel is 1.34 microns which puts it above the Samsung Galaxy S5 and Sony's Xperia series, so in theory the Oppo N3 should be able to do better in low-light conditions. What's more interesting about the rotating Oppo N3 camera is its ability to move by itself, a whole 206 degrees. Oppo has named the module Motorized camera. Once the camera locks onto a subject it can track it by itself. Panoramas have also gotten better, now offering an automatic mode and a maximum resolution of 64MP.

Oppo N3 at a glance:

The camera suite of the N3 has been upgraded and is now called Ultra image 2.0. It has slow shutter, ultra macro mode, after focus, RAW support and manual control. The beautify mode is here once again.

The Oppo N3 has the the same pixel density as the Apple iPhone 6 Plus - 401ppi. There's a Snapdragon 801 chipset with a quad-core Krait 400 processor and 2GB of RAM inside to keep things going smoothly. The Oppo N3 comes with ColorOS 2.0, which is based on Android 4.4 KitKat, no word yet on a CyanogenMod variant.

Built inside a stainless steel frame the Oppo N3 looks very sleek and premium. On the back it now has a fingerprint scanner, which can also be used to encrypt images.

The Oppo N3 comes with a breathing light under its display. Oppo calls it Notification Light 2.0. The O-Click remote is back as well, also in 2.0 form. It will help users to find the Oppo N3 and more.

The Oppo N3 supports VOOC rapid charging for its 3,000mAh battery. It can get to 75% battery from 30 minutes of charge. Oppo says you can get 2 hours of call time from 5 minutes of charging. There's a new mini VOOC charger specifically for the Oppo N3. 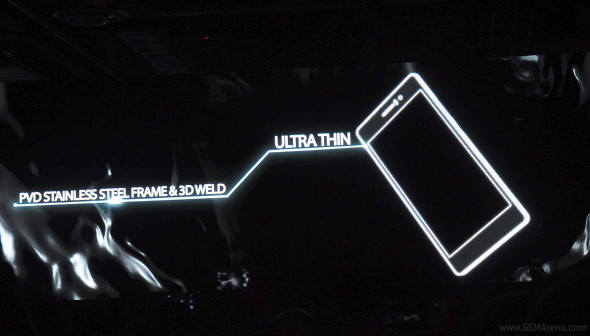 The Oppo R5 is built on a foundation of aluminum alloy and is welded together. It features a special coating material on the back and a micro arc frame on the sides. Oppo is very proud of its cooling technology thanks to a liquid-metal-like material called phase-change metal (PCM).

Oppo R5 at a glance:

The AMOLED display got some quality time on stage too. Oppo claims it has the highest brightness, lowest reflectance, highest color rendition and infinite contrast ratio - all of which characteristic of AMOLED technology, save for the impressive brightness.

Oppo N3 has the world best fingerprint scanner such as Hauwei Ascend Mate7. So far as, it provide screen scroll and camera contol. Up to five to be register, It provide convenient SW and then guest mode.

No one can say how good aphone really is until he uses it himself. Also, different people have different opinions and views about different phones. There can be no comparision in it.