Back in February Qualcomm unveiled its Snapdragon 700 series with a focus on AI, as is the trend. According to the latest information, the first two chips in the lineup will be the Snapdragon 710 and Snapdragon 730 and their full specs just leaked online.

Sitting between the 600 series and the flagship 800 series, the 7xx will feature octa-core CPU where six of the cores are for efficiency and two of them for performance. Interestingly enough, the Snapdragon 730 will be built on the 8nm LPP process, making it the smallest one ever, manufactured by Samsung. 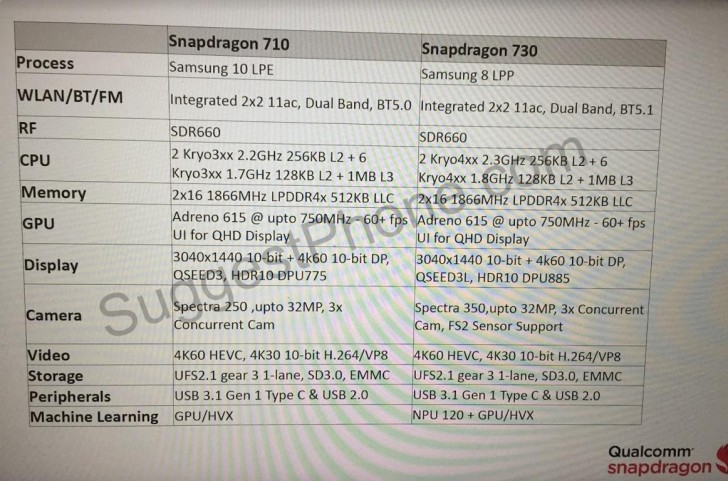 While the 10 nm LPE (Low-Power Early) process offers 27% higher performance and 40% lower consumption, compared with the 14 nm one, the LPP gives 10% performance improvement and 15% power reduction on top of these numbers.

The RF transmitter, listed as SDR660, is the same as the one in the Snapdragon 630 and Snapdragon 660, meaning upcoming phones will have the same band support as the phones powered by the latest 600-series chips.

The maximum supported resolution will be 3040 x 1440 or WQHD+, which is the 19:9 ratio that many phones with notches implement nowadays.

Since Qualcomm said the 700 series would be AI-oriented, there will be a specific machine learning neural processing unit called NPU 120, coupled with GPU/HVX on the Snapdragon 730, while the 710 will not have the dedicated NPU.

Or better still, just get a HELIO G90T processor.. it has newer cores and better graphics