Redmi loves to casually stir the pot of rumors, with a video from the last few days revealing an elevating selfie camera for the upcoming flagship of the series, despite the brand director’s words that no such thing would arrive.

Now, a render of the phone that is supposed to look like the real deal appeared on Weibo, revealing the looks of the phone - it will sport bezel-less full-front display with a glass back and a triple main camera. The selfie shooter appears to be in the middle. 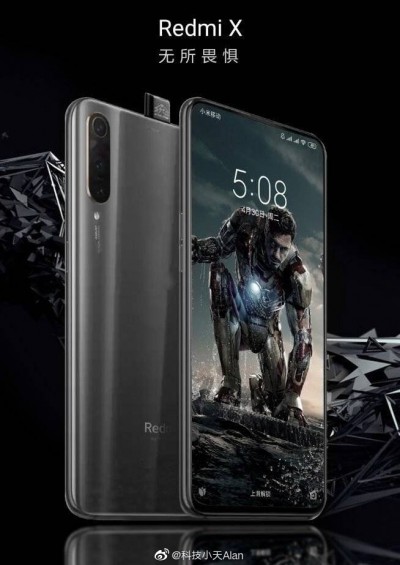 The leakster does not explicitly say this is the official teaser of the Redmi X, but it sure looks like one. Some might say the selfie camera looks poorly edited, as well as the front, and the date on the clock is from yesterday, which we doubt Xiaomi would do. Nevertheless, we see the Redmi logo on the back, slightly different camera setup than the Mi 9 and a really small chin. The Redmi X is expected to have Snapdragon 855, but we won’t be surprised to see a more affordable version with toned down specs, like a Snapdragon 710 chipset and a non-48 MP camera, since the flagship is expected to have the same snapper as the Redmi Note 7 Pro. We’ll know whether any of this is true when the phone is announced, which should be very soon.

I'm hoping this does NOT come with an AMOLED panel. My eyes can't take the strain of PWM flickering and I don't think DC dimming is an ideal solution until proven otherwise.