Isn't the Samsung A-series just a royal mess - even numbers, odd numbers, pluses sprinkled here and there, and a year stamp to top it all off. Let's go ahead and see what the Galaxy A7 (2018) is exactly and who it's for.

In the absence of an A5 this year, the A7 (2018) and the A9 (2018) happen to be the two odd-numbered phones, and they have something in common - each has a few cameras more than usual. The A9 goes all out with 4-module array on its back - a normal wide angle, an ultra wide angle, a telephoto, and one more just for depth detection. Well, the A7 skips the telephoto, but that's still three cams on a midranger. Just on the back, that is - there's an extra one above the display for selfies, and it's paired with a flash too. 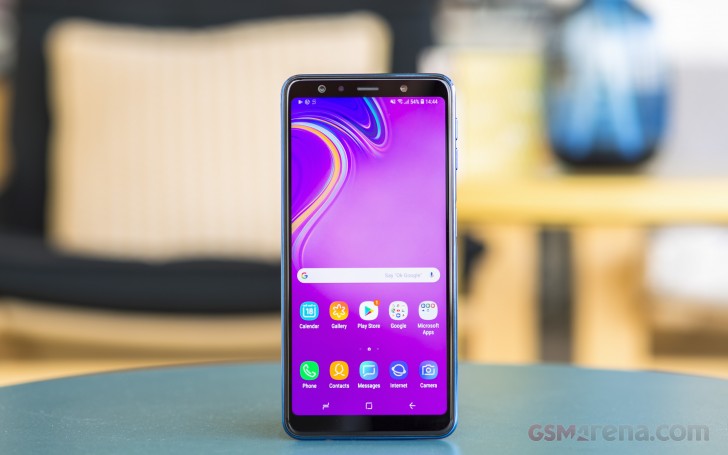 Then there are a couple of very Samsung things you'll find on the A7 - a SuperAMOLED display and an Exynos chipset. The 6-incher has a FullHD resolution in a tall aspect, the SoC is made on a 14nm process, so all is perfectly fitting the handset's market segment - it's well specced, but not too well specced.

For example, there's no form of fast charging, and the bundled adapter is quite the weakling. At least there's not all that much battery to fill up. Wait, what? No, really though, the otherwise modest 3,300mAh capacity should be more than adequate for the display/chip combo if previous experience is any indication. That said, there's nothing adequate about a microUSB port, not on any phone anymore, but certainly not on a mid-tier A-series model, even if that A isn't quite what it used to be.

Anyways, let's calm down and see what you'll walk out of the store with.

A rather plain white cardboard box, that's what, with a simple shiny blue 'A7' being the only accent. It doesn't get much fancier than that on the inside, where you'll find an outdated 5V/1.55A adapter and a USB cable to go with it. On the plus side, there's a pair of earbuds - basic, but included. 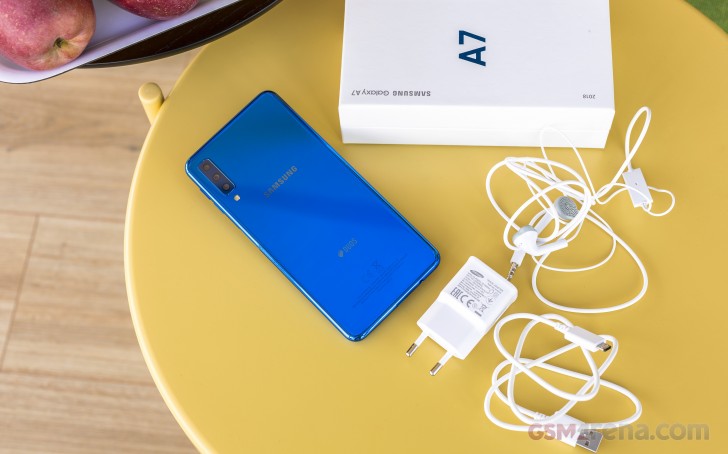 There's no need for excess in the presentation, however - the phone has plenty of flair all on its own, particularly the blue one we have for review.

I have this phone from 2018 and still it is working very good. I love it

Want a new phone what to upgrade it