Fresh off the press image leaks and the announcement of the Hennessy flip-phone Samsung has announced the Galaxy Golden.

It employs the rare clamshell design and offers two 3.7" Super AMOLEDs along with a numpad. The device will cost KRW790,000 which amounts to around $700 - quite pricey considering the feature set. 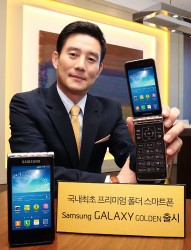 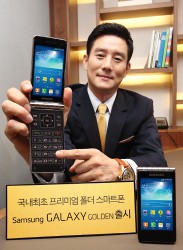 Powering the Galaxy Golden is a dual-core 1.7 GHz processor. There are also an FM Radio and 8 MP snapper on board. Samsung's easy mode is preinstalled - it gives a simplified UI so that core functions are easier to access. There's also a pedometer on board, which nicely matches with Samsung's S Health app.

Samsung you have made your name, do not waste on such phones.

The new Galaxy Golden looks lıke Samsung SGH G400. They stopped marketing that model years ago before it was known at the market. G400 was the best of Samsung at that time. It seems that Golden woll be more functional and popukar than G400. I am look...