The Samsung Galaxy S9+ (SM-G9650) – the one with a Snapdragon 845 chipset – was spotted by AnTuTu in its database. Surprisingly, this version has 6GB of RAM rather than 4GB like the Exynos 9810 version we saw on Geekbench yesterday.

The rest is a familiar story, starting with an 18:9 screen with resolution defaulting to 1,080 x 2,220px (of course, that’s set in software, the hardware will be QHD+). The OS is Android 8.0 Oreo as expected and there is 64GB of built-in storage. 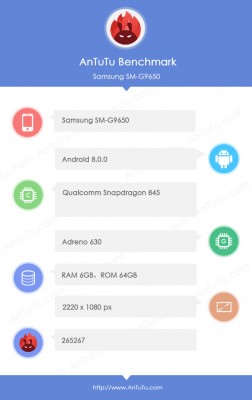 The benchmark score is interesting too. It matches Qualcomm's reference design and outscores the 2017 chips.

Note that we’re yet to see how the Exynos 9810 version of the phone will perform on AnTuTu. Leaked Geekbench scores show an advantage in single-core CPU performance, but AnTuTu is a compound benchmark that includes things like GPU performance.

And how do you know this???

I understood what you were saying. I was saying that the exynos cores are going to draw substantially more power and that will cause throttling.

Of course there's throttling in every electronic device. What I meant was that samsung is going to limit the performance of exynos 9810 so that it lines up with SD 845