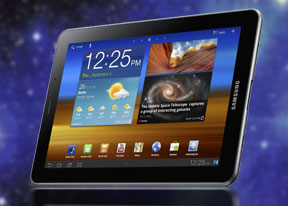 The fact that the Samsung Galaxy Tab 7.7 has a thinner profile and a more favorable screen-to-bezel ratio than just about any other slate out there would probably be enough for us to pronounce it a real looker. But the good news don’t really end there with this one – there’s also the metallic back, the nicely curved lines and the lack of buttons on the front, which contributes to the overall high-tech feel.

So, as a whole we can conclude that the Samsung Galaxy Tab 7.7 is easily among the best looking pieces of technology we have seen this year. And that’s certainly a good thing when you are talking a device, belonging to a class where coolness is rated way higher than practicality.

The Samsung Galaxy Tab 7.7 sized up against the 7" BlackBerry Playbook and the 4.3" Galaxy S II

And yet, despite all the superlatives it deserves, the design won’t be the Galaxy Tab 7.7 key selling point. For that is a role most certainly reserved for its 7.7” Super AMOLED Plus screen of WXGA resolution (that’s 1280 x 800 pixels).

If you did the math already, you’d know that the Galaxy Tab 7.7 display has a pixel density of 196 ppi – the highest of any tablet out there. Just for comparison, the 7” Galaxy Tab had a 169 ppi screen, the Xoom LCD had a density of 149 ppi, while the iPad display has just under 132 ppi. Now smaller tablets need higher density as they would normally be looked at from closer range, but despite that, the 7.7” is still sharper than any of its competitors.

The Super AMOLED Plus is 7.7 inches of pure brilliance

And then, there’s the spectacular image quality reserved for Super AMOLED Plus displays. With the AMOLED technology blacks are as deep as they get as individual pixels can simply be switched off, unlike LCD where the whole panel is backlit at all times.

And the viewing angles of the Galaxy Tab 7.7 display are just as impressive with icons looking as if they are printed on top of the glass rather than be smeared and blown out when looking them from the side. Sure, there is some color shifting at extreme angles (we are talking close to 180 degrees here), but that’s the worst that could be said about it. No other slate screen can even come close to that.

Finally, since Super AMOLED Plus screens are almost perfectly non-reflective, you don’t need to worry about losing the image quality under bright lighting. Legibility issues in the sun are also out of the question – another first for tablets.

Until now we were used to slate screens having much worse quality than that of high-end smartphones. The iPads were no match for the iPhone retina, the Xoom couldn’t hold a candle to the Milestone LCD and even Samsung’s own Galaxy Tabs isn’t in same league as the Galaxy S smartphones. With the Galaxy Tab 7.7 however, we are seeing the trend change.