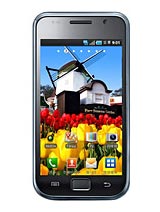 I bought a samsung galaxy s few days ago and it's a very good handset,

the pb i face, is the samsung kies software; i downloaded it from the web site, so o got the latest version,
once i connect the phone to my pc (after setting connection usb to 'kies') i don't get the phone icon on samsung kies software, therefore i can do nothing using that software !!
it's like the phone isn't recognized;
i'm on windows vista et i reinstalled the software but same results !
(i know i can connect the phone as a mass storage but..this is not what i want)

have u had this problem ? is there any solution ?

Anonymous, 23 Aug 2010which countries have DMB TV ?south korea has a DMB TV

the samsaung m110s does have a nice feel to it but for me comp with the htc desire the desire is a much more power full and user friendly phone. and snap dragon prosesors is just the best

heya all just got the htc desire and must say what a nice phone compared to the samsung galaxy realy never ever experienced something like it.

which countries have DMB TV ?

its best quality ..Thank you for the great efforts from Samsung .. that the world makes for faster progress

hello, I too am from the philippines and just got the M110s... does anyone from manila with this device know if there is a way to enable 3g internet... cuz ive been fiddling with it for 30 min now and cant seem to get it to work... there is an english keyboard available but some of the apps are wholey korean...

am from philippines, having issues checkin prepaid balance..error says "request not recognized"

im unable to use the radio functionality as well,..

I got my Samsung Galaxy S i9000. My very 1st touch phone... As newby! I really want a worthy adversary on my side, a something that I can relay on too...

Thus this phone answer it? Well, a hell yeah...
Aside from the 1Ghz processor... for a phone it surf fast and down load faster... They said that symbian as an OS does not require a high end processor, well not frankly... OS do have certain qualifications needed perhaps on Galaxy it over runs it... BUT in multitasking environment it paves off. No hanging like the others claiming the BEST... More likely its competitive with iphone 4 but its has a locking advantage over the other... Lack in freedom and choice... iphone 4 is much more expensive compared with the Galaxy...

I have not yet fully gasp all the features of this phone but I think its one of the best... There is in the market...

Soo, what's about the tulips and the windmill? being a Korean phone =/

Areef, 02 Aug 2010Hey guys iam also agree that galaxy is compare to iPhone, but galaxy doesn't has that multitou... more@Areef. That isn't a comment on the phone, that's a comment on the android platform. Android does have calendars, iphone doesn't have "unlimited" outlook (especially when it comes to exchange). Pinch to zoom functionality may be missing, but that has been Androids choice for a while, trying to avoid the legal battle with Apple, although it has been throwing it in here and there. Don't trash a phone if you're having issues with the platform. And hey, at least I could use this as a phone, unlike the iphone :P.

I am returning my Galaxy S 16Gb. It is very good in general but the GPS is terrible, terrible. I need a working GPS, not a useless one. Pity, what a pity... no alternatives since android does not support external bluetooth gps units.

Do something Samsung! Maybe a recall is needed.. it appears to be not only firmware but also hardware issues.. bad antena? Maybe the new broadcom chip? Useless GPS with poor sensitivity.. always loosing locks.. shame, shame.

Hey guys iam also agree that galaxy is compare to iPhone, but galaxy doesn't has that multitouch in attachments, in mails. And no calendars, no unlimited outlook configuration, and lot more other features, galaxy is only good for the screen. First use the phone and then comment on that.

This phone s too much expensive compare to upcoming nokia n8

This phone s too much expensive compare to upcoming nokia n8

Thanks Sam,
Ive been noticed tat tis version is only released
in Samsung home country, since for the outside
country they already released the I9000 version...

Is it possible to make the I9000 to use Korean language for its menu? I googled for the application/software,
they only have the Korean Language Keyboard, which mean it only supports for texting service.

Also heard, that in Korea(and Japan, i guess), they used they own band, not similar with GSM.

Can u get me a feedback Sam?
Thanks~

the galaxy s would have been my perfect phone if i was to switch phones, until i realsed it didn't have a flash. now it rests with the SE x10 or HTC desire.


what are your thoughts??

You can get the swype input in xperia X10 mini also

Paul, 13 Jul 2010No flash Silly Samsung No led notification light AGAIN silly Samsung Everyone who buys a s... moreSo what phone have you switched on? Nokia? Apple? HTC? For my experience it really depends on the user either they are for the brand, style, gadgets, software, price, etc.

Seems that with the iphone 4 controversy still going on, each brand is picking on each other from missed calls, battery life, software glitches, screen display problems. I have switched from nokia, siemens, apple, palm and now samsung. All i can say is not one brand is perfect. The good thing is that all of them are improving with the new models that comes out. the new smartphones right now are far better 2 years ago and much cheaper. Good luck on your new phone...