The music player of the Samsung M5650 is exactly the same as in the Jet and Star and hasn't been altered much from the M8800 Pixon.

It allows filtering tracks by author, album, and genre. Automatic playlists (recently added, most played etc.) are also generated and can subsequently be used as filters. If that doesn't seem enough, you can create your own custom playlists. The music player can naturally be minimized to play in the background. In that case though, you won't be able to control it with the hardware music keys unless you're on the homescreen. Another thing to note is the absence of virtual on-screen music buttons (skip, play, pause) in the music player interface. You get larger album art instead.

The music player also has a dedicated homescreen widget, allowing quick access to the full version of the application with only a single tap. The equalizer selection offers the standard presets like pop, jazz, classic, etc. but it also packs three additional options - widening, dynamic and surround effects.

Last, but certainly not least, the player is nicely touch-optimized to include fast forward and rewind, just like on the S5600. This adds up to an excellent music application that can fully replace your portable MP3 player.

The Samsung M5650 Lindy features an FM radio with RDS. The M5650 Lindy's radio app offers intuitive controls and has the Find Music recognition service implemented, which works much like Sony Ericsson's TrackID.

The FM radio application o the radio and player widgets

The radio app is in the Applications menu but the Radio widget on the home screen gives you more immediate access. Tapping on it brings up the radio or you could just use the widget's controls to start/stop the radio or change the station. It can only skip between saved stations though, and if you want to search you'll have to do it in the actual app.

Speaking of stations, you can save stations but they are labeled just by their frequency and you can't rename them. There's a separate list for your favorite stations though.

The audio quality of the Samsung M5650 Lindy is pretty fine and certainly that best that we have witnessed from Samsung recently. All readings rank as at least "good" by our books, while some are even downright excellent.

The frequency response is spot on for most of the range with the slight bend that you see at the graph below being mostly outside the audible frequencies. Unlike the Corby, the Lindy has great stereo crosstalk and near perfect distortion levels.

The noise level and dynamic range are among the best we have seen so it makes up for quite a formidable package indeed. 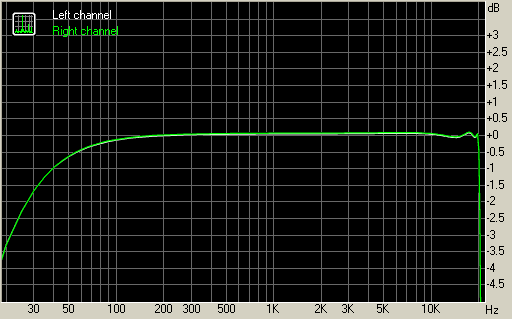 The video player is not something you will use often

The video player has a simple interface with not too many features. All the basic are covered though, and that should really be enough as the screen size doesn't really lend itself to watching whole movies.

The player supports MP4 videos but we only managed to get QVGA samples running. The VGA resolution videos we tried were a no go.

The Samsung M5650 Lindy features a 3 megapixel camera with a maximum image resolution of 2048 x 1536 pixels.

The camera also sports the nice Smile shot feature. Basically when it's on, pushing the camera button doesn't immediately result in taking the picture. Instead, the camera just starts tracking the framed face. As soon as the person smiles, the handset takes the shot for you automatically.

The camera is not a spectacular performer, but it's perfectly acceptable for a 3 megapixel snapper. The iPhone 3GS doesn't really perform any better than the Lindy in this area. Image quality is pleasing, with good amount of resolved detail and spot-on white balance. Noise levels are good for the class and the only reason to possibly question the Lindy's photo quality is the slight lack of color saturation.

We also snapped our resolution chart with the Samsung M5650 Lindy. You can check out what that test is all about here. 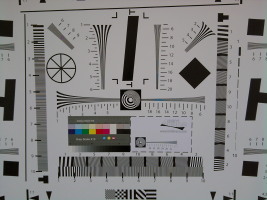 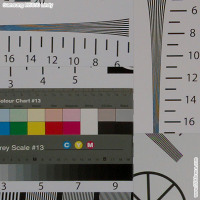 The video recording capabilities of the Samsung M5650 Lindy are very poor - it maxes out at QVGA@15fps. We guess the captured videos are good only for MMS purposes.

Here is a sample Samsung M5650 Lindy video recording for you to check out.