Canalys has issued its report on the Chinese smartphone market's performance in 2017 today. For the first time ever, there was a year-on-year decline in sales, with 4% less devices sold last year compared to 2016. 459 million smartphones were shipped in China in 2017.

The drop in overall yearly sales was heavily influenced by the fourth quarter, when shipments plummeted by over 14% compared to Q4 2016. 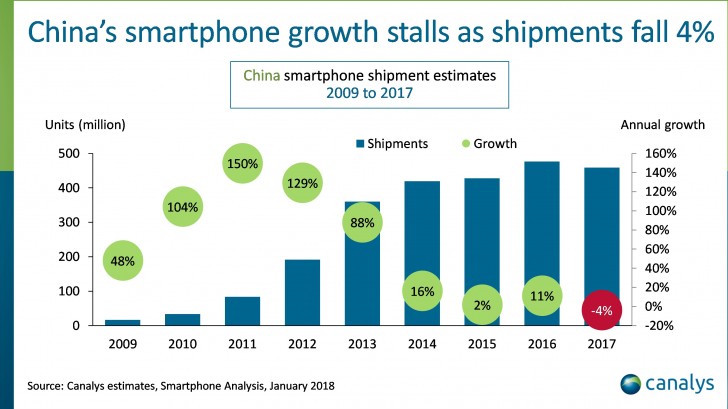 Tha analysts at Canalys say Huawei's Q4, its best ever quarter in China, has something to do with the company's successful push into tier-three and tier-four cities. Its Nova and Honor brands have gained market share from smaller vendors such as Meizu and Gionee. Honor in fact contributed more than half of Huawei's shipments, and cannibalization between the two brands is a concern.

Meizu and Gionee's positions in China could weaken even more in 2018, as Lenovo and ZTE will turn their attention to their home market too, thus intensifying the competition outside of the top five.

In my college the market is really saturated by sammy, oppo, vivo and iPhone, they are mostly girls who fall for not-so-good selfie but aggressive advertising