The music player is the same as the one used in the Walkman-branded Sony Ericsson phones. Well, not quite. In fact, Sony Ericsson W950 boasts one of the most developed music players we have seen in a mobile phone. Of course, it supports playlists with shuffle and loop options while offering the usual equalizer presets including the Walkman MegaBass one. The dedicated music player key on the keypad along with the multimedia keys, that come alive once you have started the player, really make the life easier for the user - not that we would expect any less than that when we are talking about a Walkman-branded mobile.

Nice innovations are the several animated background visualizations, which are a very nice touch, by the way. An added way to sort all your music is by using the added rating and mood designations. First, you can add ratings to the songs and then filter the available tracks by their rating. The mood designation, on the other hand, means that after adding a corresponding mood to your tracks you can later on filter the songs and virtually listen only to those that suit your current mood.

The player also offers a sleep timer allowing it to turn off automatically after a user-defined period. One of the coolest things about the player is that you can scroll through your tracks a lot easier using the side Jog Dial.

The external speaker as well as the stereo headset provides a nice listening experience – nothing less than one would expect from a Walkman phone. The speaker manages to sound very mild and pleasant although lacking substantial bass element. The headphones don’t have that problem at all and sounded more than satisfying.

The Video Player application offers basic functionality. A nice feature is that you can watch your videos in landscape mode at fullscreen view. According to the manufacturer, the Sony Ericsson W950 is able to play smoothly videos with VGA resolution, captured at 30 fps, which is more than enough to watch a music video or even a movie. Besides the usual mobile formats such as 3GPP, the smartphone supports MP3, AAC+, MPEG-4 and Real Audio 9 and RealMedia formats.

The stereo FM radio that the W950 is equipped with supports RDS and can store up to 20 radio stations. If the radio station has RDS broadcasts, it gets stored in the phone’s memory with its name. The equalizer presets as well as the sleep function and the visualizations that are available for the Music player are available for the FM radio, too. This again makes it one of the most developed FM radio applications we have seen in a mobile.

Synchronization with the PC or remote server via SyncML also works seamlessly. The user can choose items to be synchronized.

The Sony Ericsson W950 comes equipped with the famous Opera 8.0 web browser, which has made a reputation as one of the best for mobile devices. It supports HTML, XHTML, JavaScript, frames, CSS, and TSL and SSL security protocols.

Users can quickly and easily switch between portrait and landscape modes as well as change from a normal view with scroll bars to a full screen view. Furthermore, you can use the Text mode option to reformat pages to exclude pictures and thus save some of those precious megabytes you pay your network carrier for. We are pretty happy with the browser capabilities but it must be noted that the Web browser that comes with the Nokia Symbian smartphones with the S60 3rd edition user interface outperforms it with an ease. 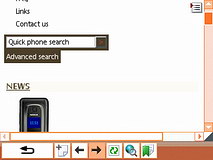 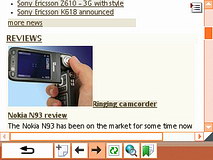