Sony Xperia XA2 runs on Android 8.0 Oreo. Despite the latest Android OS, don't expect a radical change in the UI of the device compared to the XA1 as most of the changes the new OS brings are under the hood.

Long-term Sony fans should feel right at home with what is essentially the same Xperia launcher and overall light level of OS customization. The homescreen appears unchanged from previous Xperia generations. This includes the swipe down gesture, which shows a screen of the apps you use most along with recommendations for new apps to install. The search field is highlighted so you can start typing the app's name immediately.

The traditional app drawer is present, and you'll find a number of proprietary apps pre-installed. Sony takes great pride in the A/V prowess of its devices, and the multimedia apps are all custom and feature-rich - Album, Music, and the Video app.

Themes are available (both free and paid) that can customize the look and sound of the Xperia XA2. Some themes are even interactive, with their wallpapers reacting to your touches. Besides themes, the Xperia launcher also offers wallpapers, grid settings and various transition animation options.

The notification drawer and the task switcher are very similar to the vanilla Android ones. There is also a Split Screen feature available to a limited number of apps.

Finally, in addition to the fingerprint unlock, you can setup Smart Lock. It gives you conditional security - trusted nearby devices, locations, faces, or voices can allow you to skip the security protocol that you may have set up on the phone.

The Sony Xperia XA2 use the new mid-range chipset by Qualcomm - the Snapdragon 630. It is replacing the widespread and very efficient Snapdragon 625 that was the heart of a lot of smartphones throughout 2017. The new XA2 series also marks Sony's departure from MediaTek's chips, which were a good match for the XA1 lineup, but are left behind now that the phones have a more premium midrange vibe (and more premium pricing!). 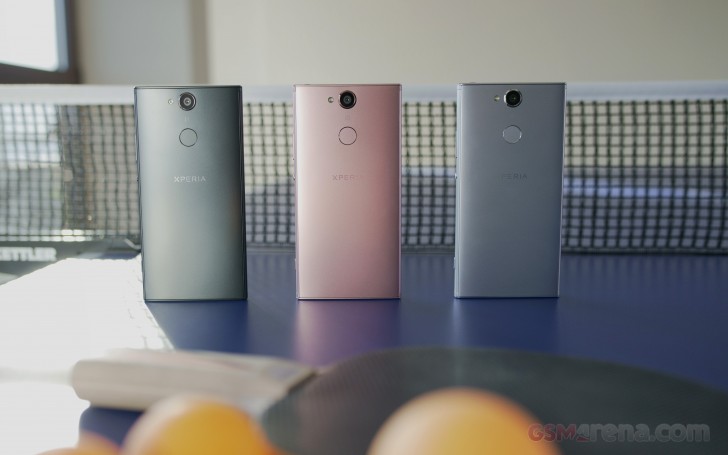 The Snapdragon 630 chip offers a classic octa-core Cortex-A53 processor now clocked at 2.2GHz (up from 2.0GHz in S625). The GPU in charge of graphics is Adreno 508. The Sony Xperia XA2 also comes with 3 gigs of RAM, while the Ultra model has 4GB.

GeekBench is where we go first, and the Xperia XA2 scored the same odd results we got from the U11 Life and Moto X4. Not that they are bad, on the contrary, but the numbers are on par with the slower 2.0GHz CPU available on the Snapdragon 625 inside the Xiaomi Mi A1 and Redmi 5 Plus.

The Galaxy A8 is superior here, as it achieves this score with two A73 cores instead of four A53s.

Looking at some GFXBench onscreen graphic scores, the Adreno 508 inside the XA2 is on par with the same GPUs inside the Moto X4 and U11 Life rivals. It is noticeably faster than the previous Adreno 506 (Xiaomi's phones), Samsung's most recent Mali-G71 inside the Galaxy A8, and Huawei's mid-range choice of Mali-T830.

The Xperia XA1 has an advantage of lower 720p screen resolution, which explains its better graphic performance.

With comparable CPU performance and superior graphics results, it's no wonder the Xperia XA2 does great in the compound AnTuTu benchmark. It's beaten only by the Galaxy A8 (2018), which has a better processor and more RAM.

The Sony Xperia XA2 delivers great performance for its class, and the new mid-range GPU looks very promising. The XA2 has balanced performance across the board, and we didn't experience any hiccups with the most popular games, social and office apps.

On another positive note, the XA2 won't get hot under pressure, won't need to throttle the performance to prevent overheating, and will keep its cool for long periods of running at full speed.