Verizon branded HTC One Max leaks out in live photos

After showing up next to a Samsung Galaxy Note 3 a couple of days ago, the upcoming HTC One Max made yet another unscheduled appearance. This time around, the HTC phablet posed for the camera wearing Verizon Wireless livery. 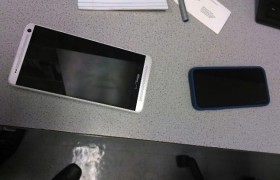 The leaked images fall right in line with previous leaks. The source of the photos has also reportedly confirmed the presence of removable back cover and fingerprint sensor on the device.

The rest of the rumored HTC One Max specs include a leggy Qualcomm Snapdragon 800 SoC, 6” 1080p display, and 4MP camera with UltraPixel tech. The phablet is rumored to break cover at some point in the middle of this month.

which phone should i buy xperia z1 or htc one.... plz tell me i m confused. thnx

HTC One is an epic phone and this will be even better!!!!!

HTC made best phones of 2013. Right, low light photos suffer from purple tints, however still it captures low light photos much better than other brands. At least you can capture what's around despite tints. My current phone is HTC ...