A day after confirming the existence of Xplay 5, vivo has revealed its unveiling date. The Chinese company has released a new teaser that confirms the device will be made official in less than a couple of weeks from now - March 1 to be specific. The event will take place at the Beijing Water Cube (19:30 local time). 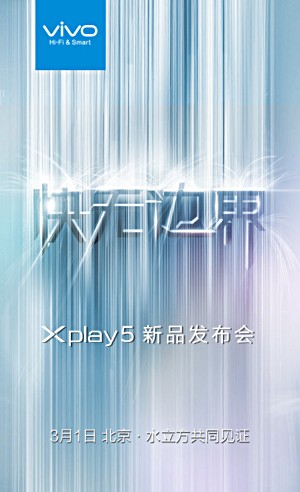 Aside from confirming the Xplay 5 name yesterday, vivo had also revealed an important design aspect of the handset - dual-curved display. In today's post the company referred to the device as "borderless." While nothing else has been officially revealed/confirmed by the company, we expect to see more teasers and leaks in the coming days given the phone is nearing its announcement.

From what has been rumored until now, the vivo Xplay 5 will be powered by Qualcomm's SD820 chipset and come with 6GB of RAM. It is also said to feature solar charging.

I think solar charging on phone is a waste. Most phone components damage cause by high temperature. But let's see what VIVO can do.

bring it on Vivo wiat a minute who is vivo anyway?